Women and the Civil War, Carter House and the Battle of Franklin

Today's post is by Stephanie Grace Whitson, standing in for Debra Lynn Costello.

The women who herded their children down these stairs while a fierce battle waged around them are barely mentioned in this place. They are more of a footnote to the story of the Battle of Franklin, Tennessee, wherein 18,000 mostly barefoot and starving Confederate soldiers engaged the Federal army. 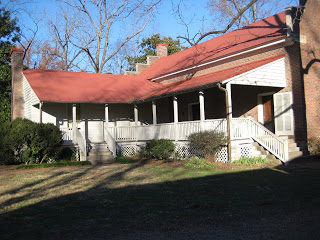 Hay bales literally yards from the back door of Carter House pictured at left mark the line of battle, but the battle didn't stop at those hay bales. It surged past it, until men fought in the yard while sisters and mothers and children huddled in a stone-lined basement room, and two non-combatants did their best to keep soldiers in search of respite from breaking in.

One of the men in that basement room, Moscow Carter, had already been a prisoner of war. His wife was dead and he had signed the oath of allegiance to the union so he could get home to help care for his four children. Moscow’s father, Fountain Branch, was also a widower. When Fountain Branch and his wife Polly moved into this lovely brick home, it was at the edge of town on Columbia Pike, the main road to Nashville.

It takes more than a little effort to imagine farmland and isolation today, as tour guides tell visitors that the cotton gin was across the two-lane paved road near the Dominos Pizza. But in the basement, with the saw-marks still evident on the undersides of the floorboards above your head and the faint aroma of “basement,” it gets easier to imagine the four women living here in what must have sounded like hell.

One woman, Fountain Branch’s daughter-in-law, had come north from Mississippi with her two children … to be safer. What must she have thought as she huddled in the basement? Could she hear the bullets peppering the side of the house? Could she hear the screams?

When the battle was over, Squire Carter (owner of the house) and his two daughters lit lanterns and went looking for their brother, Todd. He’d been off at war for a long while; a courier and aide to one of the generals fighting around their home that day. He was out there … somewhere. They found him only 175 yards from the house. He’d been lying on the battlefield through the long, frigid night.

While an 8-year-old and an 11-year-old held lanterns, a doctor operated on Todd’s head wound and moved on to others, using the Carter House parlor for a surgical theater.

Forty hours later, resting in the room pictured on the right, wounded in what was left of the family’s vegetable garden, Todd died, just a few yards from the room where he was born.

Two days later, when the Confederate army left the area for Nashville and another ill-fated battle, the women of Franklin were called on to nurse thousands of wounded men. Thousands.

Those nurse’s photographs do not hang on the walls of the Carter House museum alongside those of the men they cared for. The women of Franklin remain mostly nameless, represented in the museum only by an ammunitions chest that Moscow Carter found on the battlefield and the family (presumably the women) later used “to hold quilts.” The women are represented in the fine running stitches that hold white stars on the blue ground of a hand-pieced flag “presented to the men of Company D, First Tennessee Regiment … by the ladies of Franklin.”

Who were they? What were they names? What did they look like? How did they feel about … anything? The museum doesn’t tell us. The tour guide doesn’t say. And the walls of Carter House keep those secrets.

What women of history do you wonder about? What questions would you ask if they came for tea?

The women of the Civil War inspired author Stephanie Grace Whitson's newest book, Daughter of the Regiment, which is set in Missouri during the Civil War.

Irish immigrant Maggie Malone wants no part of the war. She’d rather let “the Americans” settle their differences—until her brothers join Missouri’s Union Irish Brigade, and one of their names appears on a list of injured soldiers. Desperate for news, Maggie heads for Boonville, where the Federal army is camped.

As the mistress of her brother’s Missouri plantation, Elizabeth Blair has learned to play her part as the perfect hostess—and not to question her brother, Walker’s, business affairs. When Walker helps organize the Wildwood Guard for the Confederacy, and offers his plantation as the Center of Operations, Libbie must gracefully manage a house with officers in residence and soldiers camped on the lawn.

Despite being neighbors, Maggie and Libbie have led such different lives that they barely know one another—until war bring them together, and each woman discovers that both friendship and love can come from the unlikeliest of places.

“Whitson celebrates the strong but unknown heroines who marched off to war with their men, as well as those who maintained the home front in this Civil War-era inspirational...Based on true events, [Daughter of the Regiment] will capture the hearts of historical fiction fans.”

“Whitson explores the atypical subject of different women’s roles during the Civil War. The author’s gift for multi-dimensional characters and tight plotting shines through. Romance, family drama, immigrants and dueling factions in the same town add action and intrigue.”

To order Daughter of the Regiment: http://amzn.to/1KzPB3S
To learn more about Stephanie and her books: www.stephaniewhitson.com

Posted by Stephanie Grace Whitson at 12:44 AM