Many years ago as my husband was preparing for ministry he switched seminaries and we moved to Tuckahoe N.Y. He was attending Alliance Theological Seminary in Nyack, N.Y. at the time and was the part-time pastor of a church in Tuckahoe. Tuckahoe is actually a village of a larger city, Eastchester, N.Y. We lived there for five years. The church hired him for full-time ministry after he completed his M.Div. All of that is to help you become familiar with how I knew this place. What intrigued me most was that is was one of the primary marble quarries that helped build New York City. There were plenty of hills in Tuckahoe as one would drive up one area and down into another area. It was a small village a mile and a half in length and 3/4 of a mile in width. But you could still see where stone had been cut from the hills. 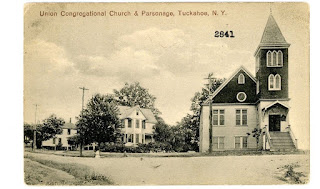 This is an old postcard of Union Congregational Church and the parsonage to the left. It was a grand house and our children had many adventures there. What you can really see is that the road going up to the house is now quite a hill. During winter storms of ice and snow it was impossible to drive up and down and reluctantly church was cancelled twice because of snow.

Here are some tidbits about Tuckahoe Marble Quarry:
•Opened in 1818
•Bronx river used to transport stone
•Stone used to rebuild a lot of the buildings destroyed by the war of 1812
•Mid 19th Century Scottish and Irish Immigrants were brought in to work the quarry.
•St. Patrick's Cathedral in NYC was built exclusively from this quarry. Along with:
•Federal Hall (1842 building), NYC
•Yonkers Public Library
And others. 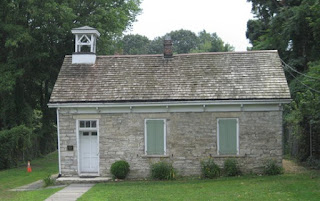 And in the town of Eastchester in 1835 a one room school house was also built exclusively from Tuckahoe Marble. Pictured here.


I searched Google books for 19th Century histories for Tuckahoe, however I only found references to the town, the marble industry and places that purchased marble from them, as well as some references of people who graduated, lived or worked there at one time.

If you're ever traveling through NY and heading out of the city you might want to check out this small little village. In our ministry we met some of the descendants of the original immigrants who came to work the quarry. Today it is a bedroom community for people who work in the city and commute using the trains.

Lynn A. Coleman is an award winning & best-selling author who makes her home in Keystone Heights, Florida, with her husband of 41 years. Lynn's latest novel "The Shepherd's Betrothal" is the third book in her Historical St. Augustine, FL. series.