As with the previous three women in this little series, all nameless, but all with very beloved stories in the New Testament, I was curious about what might have been the bleeding woman's story. Some scholars believe the woman could have been Gentile, but in my book, Hopeless, I assume she was Jewish.


The Levitical laws were clear and were followed in that culture, and embellished upon by the rabbis. 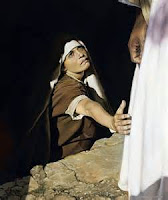 A woman was considered unclean during her menstrual cycle, or any bloody discharge. She couldn't touch anyone or be touched; she couldn't be intimate with her husband; she couldn't care for her family. She'd spent all of her money seeking a cure, but to no avail. She was alone. Isolated. Bereft. She lived in the shadows.

The woman probably suffered from some kind of female problem, such as ovarian cysts, or endometriosis, uterine cancer or benign uterine fibroid tumors--all problems which today can be corrected by modern medicine. However, at this period in history, there was no cure. The physical suffering must have been incredible, not to mention the emotional and psychological suffering.

Her husband probably divorced her, but in thinking about this woman and what she suffered, I took a different approach. I asked myself some questions. Although the bleeding went on for twelve years, was it constant? Could it have been worse at times, and even perhaps have ceased at times? What if her husband loved her through those twelve years, never giving up on trying to find a cure? What if they were disobedient about no sexual relations during her illness and succumbed to passion of the  moment, especially early on when they were younger? What if she encouraged him to divorce her and he wouldn't? What if she had a servant who cared for her? What if she became suicidal? Of course, we don't know the answers to these questions, but these are real life situations which I'm sure could have been.

Then I began to think about her faith to try one more time to be cured. I'm sure she went to find Jesus with much doubt and perhaps even cynicism. When I was in the process of writing her struggle to get
through the crowd, trying to reach the Savior, I began to cry. What faith it must have taken for her to make her way through sheer rejection amidst the whispers. I'm afraid we flippantly read through Bible stories without even trying to understand or empathize with the people involved. Of course, my story is fiction, based on historical fact, but perhaps it could have been ... ?

Leave a comment for a chance to win a copy of my biblical fiction, Hopeless, The Woman With The Issue of Blood.