Last month, I introduced Spencer Penrose, philanthropist and ladies' man, but also a significant financier for many attractions here in Colorado Springs. This month, I'll begin highlighting a few of the significant establishments made possible through Penrose's generous and charitable investments. 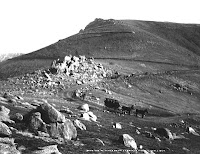 Though foot traffic and burro rides up Pikes Peak were common in the earlier days, the first crude road up the mountain opened in 1887. Built by the Cascade and Pikes Peak Toll Road Company, this new road on the north side of the mountain gave sightseers and thrill seekers the ability to reach the top of the mountain on a wagon or carriage seat. I don't know about you, but I'd prefer that over riding on the back of a donkey! Travelers could pay $1 and use their own vehicles,or $5 and be treated to a nine-hour ride on the Pikes Peak Carriage Line. Which one would YOU choose?

That carriage road saw consistent activity, but the construction of the Cog Railway on the south side of the mountain in 1891 drew the majority of passengers and travelers desiring to reach the summit. I've taken the Cog and driven the Highway, and while the drive is breathtaking in the expansive views you're granted, there's something to be said for riding in comfort while someone else is doing the driving. Considering the conditions of the carriage road, I can understand the preference of most travelers. Of course, there was also Barr Trail, a steep hiking path up the east face of the mountain with a halfway resting point at Barr Camp. Today, you can travel south from the trail and take the Cog Railway the rest of the way to the summit or down if you wish.

Thank goodness for Spencer Penrose! In 1915, he requested permission from the Secretary of Agriculture to refine and complete the carriage road to the summit of the mountain so it would be more suitable for the growing number of motored vehicles. It cost $500,000 to build. In exchange for his efforts and his financing, Penrose was granted a 20-year license to maintain the road and permission to charge a $2 toll for the duration of the agreement.

The very next year, Penrose sponsored an auto and motorcycle race up the mountain. This was the birth of what is now known as the Pikes Peak International Hill Climb, which I mentioned last month.

Twenty years later, the Highway was added to the State Highway Systems and responsibility for the management of the highway was returned to the U.S. Forest Service. For 12 years, they kept it toll-free, but without tolls to help maintain the road, the highway deteriorated and was almost abandoned. In 1948, a permit was granted to the city Colorado Springs to assume responsibility, and it still maintains it to this day.

In 1999, a settlement was reached to pave the entire highway, but due to opponents and other factors, the full paving didn't occur until 2011. My first drive up the highway was in 2007 when my then-fiance took me to the summit during a 1-week visit here about 10 weeks before we were married. At that time, the paving stopped around the height of timberline (roughly 12,000 feet), so the remaining distance was merely graded. You can see where the paving stopped in the second photo above and what the graded road looked like up close in the photo to the left. 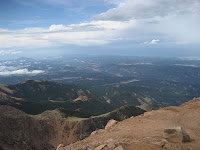 I remember when they announced full paving, as it was right after my son was born, and 3 months later, I drove with my parents and my children to the summit. With an infant and a 2-year-old and concerns about how the altitude would affect them, we didn't stay long. However, I can proudly say both of my children have made it to the summit of Pike's Peak!

* Bonus Note:
Katherine Lee Bates made notations in her journal upon standing at the summit of Pike's Peak in 1893. Some of those words later became what we now consider to be a "classic anthem" for the United States in "America the Beautiful." In 1926, a strong push was made to establish that as our national anthem, but "The Star-Spangled Banner" was chosen by President Truman instead.

* Have you ever driven the Pikes Peak Highway? When?

* If given the choice of the Cog Railway, the drive up Pikes Peak Highway, or hiking up Barr Trail, which one would you choose? Why?

Leave answers to these questions or any comments on the post below.

Tiffany Amber Stockton has been crafting and embellishing stories since childhood, when she was accused of having a very active imagination and cited with talking entirely too much. Today, she has honed those childhood skills to become an award-winning author and speaker who has partnered with Nerium International in the whole body anti-aging industry, helping others achieve optimal brain health, look younger, and live better.

She lives with her husband and fellow author, Stuart Vaughn Stockton, in Colorado. They have one girl and one boy, a Retriever mix named Roxie and and Australian cattle dog named Timber. She has sold seventeen (19) books so far and is currently seeking a new literary agent for representation. You can also find her on Facebook, Twitter, Pinterest, and LinkedIn.
Posted by Tiffany Amber Stockton at 1:00 AM