"You have to go out. You don’t have to come back."

Two years ago I did a series of posts about the Unite States Life-Saving Service. (If you want to brush up on what exactly the Life-Saving Service was and how they went about rescuing people from wrecked ships, here's a link to some of my old posts). 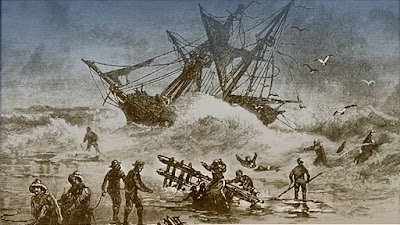 "You have to go out. You don’t have to come back." This was the unofficial motto of the U.S Life-Saving Service, a precursor to the United States Coast Guard. Back before helicopters and radar and power boats, life-saving teams braved stormy waters with little more than rowboats, storm suits, and life rings.

Out of the hundreds of men that risked their lives for the life-saving service, one man stands out as
the most decorated and most well known. His name is Joshua James, and he lived in Massachusetts. At the age of ten, James watched his mother and baby sister die when the ship they were sailing on got caught in a storm and wrecked a half mile from the harbor. 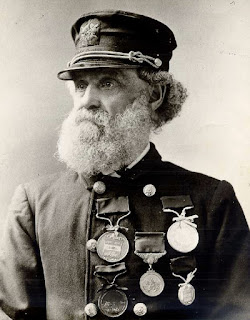 When he was fifteen, James joined a group of volunteers from the local humane society was the launched a surfboat to go rescue passengers from a floundering ship named Mohawk. That was Jame's first life-saving rescue, but he went on to spend the next sixty years of his life rescuing sailors. First, he worked as a volunteer life-saver for the Massachusetts Humane Society, and then he worked as a station keeper for the U.S. Life-Saving Service. He's credited with saving over 200 lives, and was awarded the Gold Lifesaving Medal from the life-saving service as well as several other medals from the Massachusetts Humane Society.

James died at the age of 75, after returning from running a life-saving drill in stormy weather. He apparently paddled for over an hour with the other men of his crew while they tested a new surfboat. Upon returning to the beach, he died of a heart attack. 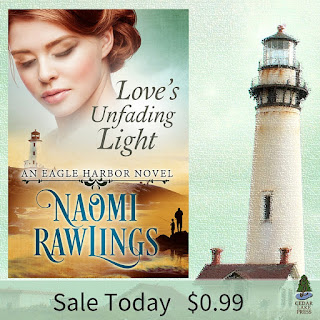 I modeled the hero in my newest Eagle Harbor novel after Joshua James. My fictional Elijah Cummings grew up in Eagle Harbor, Michigan, on the shores of Lake Superior. He spent two years sailing the Atlantic Ocean and saw life-saving teams in action. After his father drowns in a storm, Elijah returns to Eagle Harbor. Unable to sit by and watch when ships flounder coming into port, he starts a volunteer life-saving team. But the icy conditions and strong storms prove difficult for his volunteers and secondhand equipment. He soon finds himself fighting for the U.S. Life-Saving Service to establish a legitimate station—as well as fighting for the woman he’s loved for fifteen years.

Giveaway: Answer one of the questions below to be eligible for a paperback copy of either Love's Unfading Light or Love's Every Whisper. Winner's choice.

Question: Do you enjoy novels where the characters have unusual jobs and hobbies? Do you personally know anyone with a dangerous job that puts their life at risk? How do family members respond when a person they love has a risky job? 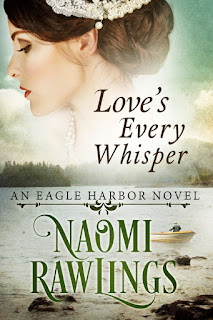 Victoria Donnelly simply wants to do something right, at least once in her lifetime. With five years of failed courtships behind her and the calendar inching closer to another birthday, she's determined to redeem herself and snag a proposal from a wealthy childhood acquaintance, Gilbert Sinclair. But returning to Eagle Harbor stirs up long forgotten memories. And worse, old affection for her betrothed's enemy.

Elijah Cummings has loved Victoria for fifteen years. But fishermen's sons don't marry shipping barons' daughters. He knows it. She knows it. The entire town knows it. Resolved to keep his distance from Victoria, Elijah focuses on establishing a much needed life-saving station, risking his own life by rescuing sailors stuck aboard shipwrecks.

He knows how to save drowning sailors, but how is he to save a woman from the biggest mistake of her life—without destroying both their hearts in the process?