Logging in the UP and giveaway!

Please welcome a friend and fellow author, Carrie Fancett Pagels to Heroes, Heroines, and History. Carrie is giving away a copy of her new release so be sure to read down to find out how to enter.

Thanks, Debbie Lynne, for the opportunity to be a guest on HHH, talking about the turn of the century in Michigan, when lumber camps were common in the straits of Mackinac. My Christy Lumber Camp Series shows the progression of three children of a lumber camp boss as they transition from life in the Lower Peninsula of Michigan to the Upper Peninsula in pursuit of better logging possibilities at the turn of the century.

First of all, where are the straits of Mackinac? The straits of water lie between the Lower Peninsula of Michigan and the Upper Peninsula. Three cities are the main gateways to this corridor, both today, and historically: Mackinaw City, Mackinac Island, and St. Ignace, Michigan. North of the straits of Mackinac we use a “c” at the end of this Indian word and in the Lower Peninsula, a “w” is placed at the end of Mackinac/Mackinaw. In between, the jewel of the straits, lies Mackinac Island. At the turn of the century, St. Ignace was a bustling city with four newspapers and was a mecca for tourists. Today it is a small town just over the Mackinac Bridge, into the Upper Peninsula. 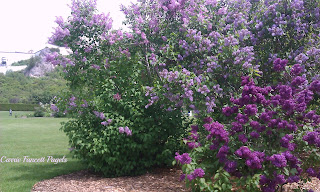 Lilacs for Juliana, which releases in August. The photo was taken on Mackinac Island, during their annual Lilac Festival. It may be hard to imagine, but at the turn of the century, Native Americans were often educated away from home at “Indian Missions” including on Mackinac Island. Children were separated from their parents and lived at school, sometimes for years. 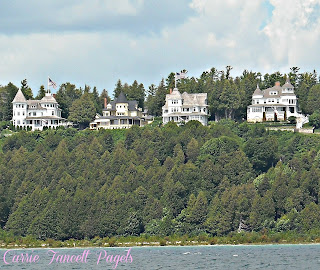 So, at the same time that lumber jacks were chopping down the pines to create beautiful structures like the famous Grand Hotel, the local Chippewa and Odawa were struggling and being “managed” by Indian Agencies, which sad but part of the history of this locale. This gorgeous lilac-covered island has a long history of strategic military location, too, with a French fort in Mackinaw City before the French-Indian Wars, moved to Mackinac Island during the American Revolution, and targeted by the British in the War of 1812.

Although Mackinac Island has a dearth of lumberjacks, lumber camps dotted the countryside both above and below the straits, with easy shipment, by water, of lumber to the mills. This was the prime time and location for Michigan’s “White gold” – the white pines that were frequently as wide across as a man’s height. The woods of Michigan’s Upper Peninsula, full of hardwoods as well as pine, beckoned the lumber camp owners north as the massive white pines were thinned out. This necessitated the transition of lumber camps from Lower Michigan into the Upper Peninsula.

Many lumber camps had almost criminal reputations, and it’s not difficult to find descriptions of some of the nefarious activities that went on, if you search for those. However, this is unlike the family lumber camp, my setting for The Fruitcake Challenge. My Kentuckian grandfather was born near Traverse City, Michigan, during this time—presumably where his father worked as a lumberjack and he returned to run his own family lumber camp. In the 1800s and 1900s, a great many men came up from the South, worked in the woods, and then returned home. As the 20th century approached, lumber camp owners were searching for more virgin woods and they crossed the straits to the eastern and middle portions of the Upper Peninsula. Expanding railroad lines, during this time, made the expansion possible, too. I try to show this in my series, with the Christy family moving their camp to just east of St. Ignace and have a scene with the railroad cross-straits transportation, which was a fun thing to learn about at Mackinaw City’s lighthouse museum. Can you imagine having railroad cars pulled across Lake Michigan? 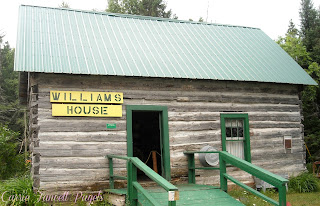 Want to learn more about lumbering? You can visit the Tahquamenon Logging Museum, in Newberry, Michigan, my home town – where my great-grandparents’ cedar cabin still stands, to get a good idea of what lumberjack life was like. Also, below the straits, in central Michigan is the beautiful virgin white pine stand at Hartwick Pines State Park, which I highly recommend visiting and they have a Logging Museum as well.


GIVEAWAY: Leave a comment to enter to win a pair of teapot earrings made by Carrie plus an ebook copy of the brand new Christmas Traditions Eight-In-One collection, The Fruitcake Challenge (A Selah finalist) The Lumberjacks’ Ball, or Lilacs for Juliana. 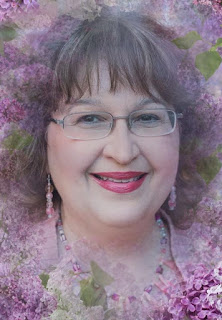 Bio: Carrie Fancett Pagels, the author of The Christy Lumber Camp Series, resides in Virginia’s Historic Triangle and enjoys reading, traveling, baking, beading, and researching--but not all at the same time!

Lilacs for Juliana releases in August, 2015, on Amazon.


Posted by Debbie Lynne Costello at 2:00 AM