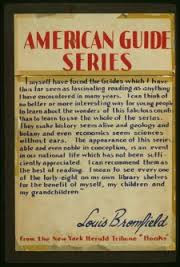 During the 1930’s, the United States was in the pit of The Great Depression. In 1932, one-third of Americans were out of work. In big cities, fifty percent were jobless. President Franklin Roosevelt’s Work Progress Administration helped to alleviate the country’s unemployment by creating jobs. One part of the WPA was the formation of the Federal Writers' Project, part of a program for the arts, also called Federal One. The project provided employment for historians, teachers, writers, librarians, and other white-collar workers.

The initial purpose of the project was to produce a series of sectional guide books under the name American Guide series, focusing on the scenic, historical, cultural, and economic resources of the United States.
Some 6000 individuals were employed by the FWP, including archaeologists, geologists and cartographers. The most well-known publications produced by the FWP were the 48 state guides to America. In each state, a Writer’s Project staff of editors worked with a larger group of field workers. 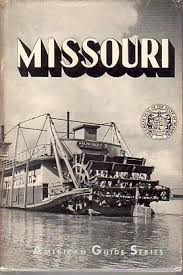 Each guide book was comprised of essays, folklore, farming and industry information and maps. Descriptions of places and tales of local history were included. In an effort to gather such information, the writers interviewed thousands of people who shared their own personal stories. The plight of sharecroppers, migrants, minorities, and others affected by the depression were honestly told and documented by writers who tried to give an authentic picture of the culture. John Steinbeck’s book The Grapes of Wrath was inspired by these stories.

In the 1930’s, 100,000 former slaves were still living. Interviews and photos collected from 2300 of them became a specialized volume called the Slave Narrative Collection. 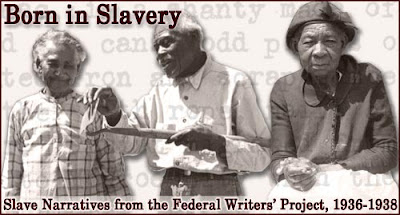 A few state governors took offense at the guide books of their states which revealed unflattering aspects and tried to stop them from further publication. In addition, the president’s projects faced criticism from conservatives who especially targeted the FWP as a waste of money. As war erupted around the world, some congressmen warned that subversives had infiltrated the U.S. and the House Committee on Un-American Activities was formed. Several writers employed by the Writers Project were under fire for writing material that was unfavorable to the country.
The Federal Writers Project ended in 1939, and when the U.S. entered World War II in Dec., 1941, unemployment was no longer a problem. Some states continued the Writers Project with their own funds until 1943.
These “uncommon stories of common people” were stored away for many years, but now they can be accessed via the Internet now through Library of Congress Federal Writers Project Information: http://www.loc.gov/rr/program/bib/newdeal/fwp.html.

***Thanks to author Lisa Wingate, I learned about the Federal Writers Project. Her latest release, The Seakeeper's Daughters, gives wonderful insight into the lives of these writers. Leave a comment for a chance to win a copy of the book.***

A multi-published author, Marilyn Turk writes historical fiction about the coastal South. Her fascination for lighthouses spawned her popular weekly lighthouse blog @pathwayheart.com, and inspired her upcoming Coastal Lights Legacy series and her Lighthouse Devotions. Her novel, A Gilded Curse, will be released March 2016 from Heritage Beacon Fiction, an imprint of Lighthouse Publishing of the Carolinas.
Posted by Marilyn Turk at 1:00 AM