Silhouettes of the 18th and 19th centuries 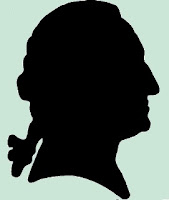 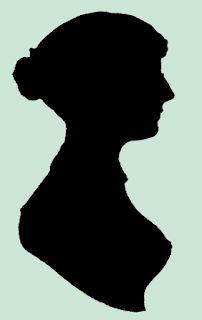 
Some images are unmistakable. The familiar inky profiles of famous historical figures leave a lasting impression. You may have already ascertained that the silhouettes that you see here belong to George Washington and Jane Austen.

A few of my most treasured pictures are the silhouettes I have hanging on my wall of my two sons at ages 8 eight and nine, along with one of my mother as a young teen. I recall watching in fascination as the silhouettist cut the the precious profiles of my boys from a piece of black paper using only a good eye and a pair of small scissors. I also have two silhouettes of my husband as a boy. It is remarkable to now see the childhood likenesses of three generations. 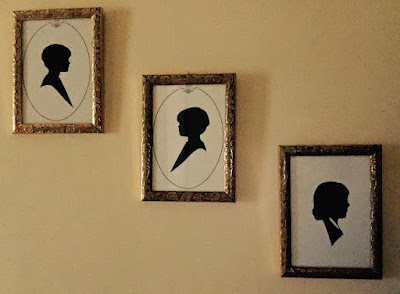 In the 1st century, Pliny the Elder told the story of Dibutade, a 5th century Corinthian girl, who traced her lover's shadow, cast by candlelight, because she wanted to keep the image of her lover with her when he went away on a journey.

A renaissance of the art form occurred in the 18th century when artists would trace the distinguished profiles of the Lords and Ladies at royal balls. They soon became popular with common classes as portraits were expensive. Black painted profile miniatures became an inexpensive alternative and were often provided by itinerant silhouettists. The profile was obtained by placing a candle so it cast the shadow of the subject, which was then traced by the artist. Profile artists promised a perfect likeness of the sitter and often kept copies of their work so they could be easily reproduced and distributed as mementos for loved ones. 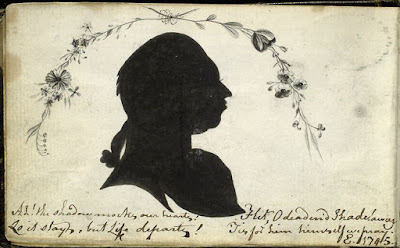 During the 18th century the images were referred to as "shades", "shadow portraits" and "shadow art", and "profiles" in the 19th century. A famous silhouette artist from England coined the phrase "silhouette" about 1830. He named them after the French finance minister, Etienne de Silhouette, who was perceived as being more concerned with his hobby of cutting black profiles than the plight of the peasants during the French Revolution.

In the 18th century, shadow portraits were created on paper, wax, glass, ivory, and plaster and painted with India-ink, water colors, and other pigments. Sometimes the artist "bronzed" the image to add detail to the portrait while keeping the facial features obscured. 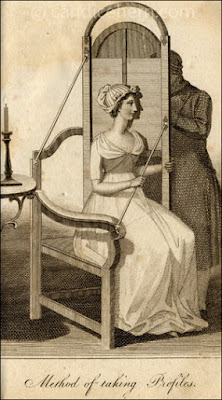 Silhouette cutting using black paper was a later technique, the one we are most familiar with. However, since black paper was not available until the late 1820's, paper had to be darkened with charcoal or lamp-black. Another method used was the hollow-cut silhouette. For this, the profile was cut and discarded. The remaining surrounding white paper was then placed against black paper or silk to reveal the profile. Contraptions were invented to help capture the silhouette, such as the Physiognotrace for hollow-cutting, a Profile Machine, and the Limomachia chair. The size of a silhouette could be reduced by using a machine called the pantograph.


Has anyone ever done your silhouette? Do you have any heirloom silhouettes? 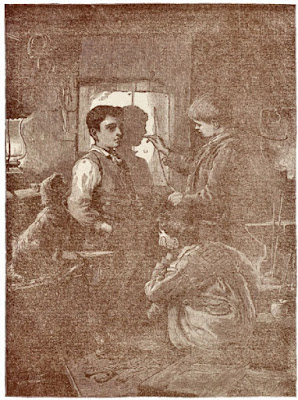 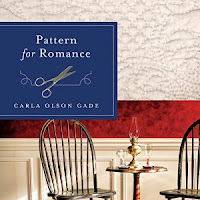 
Now on Audible (Listen to sample)

New Englander Carla Olson Gade writes from her home amidst the rustic landscapes of Maine. With seven books in print, she enjoys bringing her tales to life with historically authentic settings and characters. An avid reader, amateur genealogist, photographer, and house plan hobbyist, Carla's great love (next to her family) is historical research. Though you might find her tromping around an abandoned homestead, an old fort, or interviewing a docent at an historical museum, it's easier to connect with her online at carlagade.com.
Posted by Carla Gade at 2:05 AM