Last month, we talked about the other Caesarea in Israel, Caesarea on the Sea. This month we're
talking about Caesarea Philipi which is also a very important location in Bible history. I'll be sharing some of the pictures that we took when we visited the site.


Caesarea Philippi was an ancient Roman city located at the Southeast base of Mount Hermon. This is in the area that was given to the tribe of Dan, close to the Golan Heights.

The city was built near a spring named Panias after the Greek god Pan, who was the deity of desolate places. This spring is one of the two that feed the Jordan River. Upon the founding of this city, the spring was gushing from a cave of limestone. Today, however, the water has diminished to a seep.

The Gates of Hell 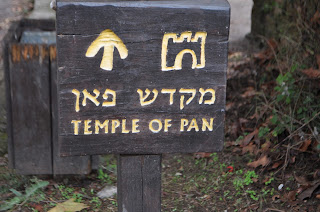 In ancient times, the spring cave was dedicated to Pan, and a temple of white marble was built next to it. In Greek mythology, Pan looked much like Mr. Tumnus from Narnia. He had the hindquarters of a goat and played a pan flute. Besides being the deity of desolate places, he was also the god of goats, shepherds and nature.

The unique thing about this spring cave is that, at the time, there was also a bottomless pit that held more water than could be measured. It was striking to Alexander the Great, as well as all the people that witnessed it. Jewish historian Josephus spoke of it:


So when he had conducted Caesar to the sea, and was returned home, he built him a most beautiful temple, of the whitest stone in Zenodorus's country, near the place called Panium (Panias, Caesarea Philippi). This is a very fine cave in a mountain, under which there is a great cavity in the earth, and the cavern is abrupt, and prodigiously deep, and full of a still water; over it hangs a vast mountain; and under the caverns arise the springs of the river Jordan. Herod adorned this place, which was already a very remarkable one, still further by the erection of this temple, which he dedicated to Caesar." - Josephus, Antiquities of the Jews 15,10,3


The ancient pagan priests would kill a goat, and throw it into the cave. The superstition was that if the sacrifice was 'eaten' by the cave, it was accepted, however if the blood of the sacrifice seeped into the water and ran back out of the cave, it was rejected.
Because the pagans believed that caves were a door to the underworld, and that water was symbolic of the abyss, this cave came to be known as the Gates of Hell (Hades). This is interesting when we note the Scriptural references to this location.

When Jesus came into the coasts of Caesarea Philippi, he asked his disciples, saying, Whom do men say that I the Son of man am?
And they said, Some say that thou art John the Baptist: some, Elias; and others, Jeremias, or one of the prophets.
He saith unto them, But whom say ye that I am?
And Simon Peter answered and said, Thou art the Christ, the Son of the living God.
And Jesus answered and said unto him, Blessed art thou, Simon Barjona: for flesh and blood hath not revealed it unto thee, but my Father which is in heaven.
And I say also unto thee, That thou art Peter, and upon this rock I will build my church; and the gates of hell shall not prevail against it.

Of course Jesus was speaking of more than just the pagan temple that lay yards from them as he spoke. The saying symbolized Christ's (and therefore our) victory over death, but this is also an example that no pagan religion or worship will prevail over the church of the Living God.

These "gates of hell" certainly did not, because the city was destroyed, probably in an earthquake around 363 A.D, and as a result of Jesus' prophecy.

Author of over half a dozen books, Amber Schamel writes riveting stories that bring HIStory to life. She has a passion for travel, history, books and her Savior. This combination results in what her readers call "historical fiction at its finest". She lives in Colorado and spends half her time volunteering in the Ozarks. Visit her online at: www.AmberSchamel.com/