Women in the Gold Rush Era 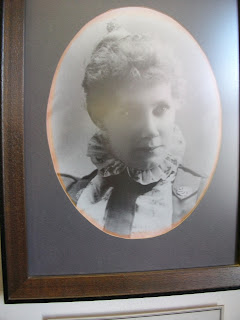 I am fascinated by stories of hardy women who ventured west during the various gold rush eras, whether it was to mine gold or silver themselves, cook or clean for the miners, care for their husbands, or for the less fortunate, worked as prostitutes. They traveled from the four corners of our country, and sometimes from far flung locations across the globe, and not just to California, but to Nevada, Idaho, Alaska and more, all in the search of adventure or to provide for their family. It took strong women to build this country, and these are a few stories of those women.

I wasn't aware until I started my research, that during the Klondike gold rush, one of ten stampeders was a woman. Journalist Annie Hall Strong offered advice for those women--her article "Hints to Women" first appeared in the December 31, 1897 edition of the Skagway News and was reprinted in papers all over the country. She wrote that "women have made up their minds to go to the Klonkike, so there is no use trying to discourage them." Speaking to the female adventurers, Strong boasted that "when our fathers, husbands and brothers decided to go, so did we, and our wills are strong and courage unfailing. We will not be a drawback nor hindrance, and they won't have to return on our account." Strong herself had been one who contracted what she termed as "acute Klonicitis." She arrived in Skagway in the late summer of 1887. 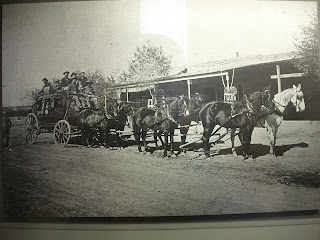 She went on to counsel less hardy women: "First of all, delicate women have no
right attempting the trip...Those who love luxury, comfort and ease would better remain at home." She outlined a list of the basic necessities that a woman must bring with her to the Klondike, noting that "First and most important of all, by far...is the selection of proper footwear." At the top of her list were house slippers, wool socks, walking shoes, arctic boots, felt boots, gum boots and ice creepers. There were lots of mittens, underwear and bloomers, but only "one summer dress" was recommended. 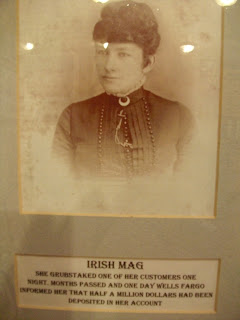 The photo of the stagecoach shows it loaded with men. If you look very closely you can see a woman inside looking out the door.

When my husband and I visited Tombstone to do research for my Finding Love in Tombstone, Arizona book, I found a story that I'd love to use someday of a woman only referred to as Irish Mag (assuming it must have been Margaret or Maggie). She grub-staked one of her customers and months passed without any word. Then one day a Wells Fargo agent informed her that half-a-million dollars had been deposited into her account!

The odds of women to men in the California gold rush era was far slimmer than that of the Klondkie as detailed below. The following excerpt is from the Sierra Foothill Magazine--you can read the full article HERE:
Females who lived in Northern California during the early years of the Gold Rush could name their ticket. The census of 1850 places the female population, by that time increasing, at less than eight percent of the total inhabitants of the country, while in mining counties the proportion fell below two percent. Calaveras County showed only 267 women in a total of 16,884; Yuba, 2221 in a total of 9,673; Mariposa, 108 in 4,379, yet here only 80 were white women; Sacramento 615 in 9,087. Likely, in those days, women who were not Caucasian were only spottily counted. Not until 1855, when a railroad across the Isthmus of Panama was completed—thus making travel through this disease-infested region somewhat safer—did more women venture west.

Women in those days were either “good” or “bad.” The “good” ones were virtually enshrined. The arrival of the first “good” woman in the mining town of Columbia was marked by a parade complete with brass band. Here, class distinction was typical of the gold camps, as exemplified when Big Annie, a well-known madame, pushed the town schoolmarm into the street. The town’s firemen, incensed by this rudeness, dragged their water cart to Annie’s place and washed her out of the building.

One young man in Nevada city wrote, “Got nearer to a woman this evening than I have been in six months. Came near fainting.”


Miralee Ferrell started her writing journey in 2005 and her first book, The Other Daughter, was published in 2007. Since then she’s become is an award-winning, 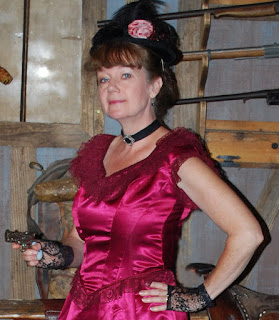 multi-published, best-selling author with 11 books in both women’s contemporary and historical romance, along with another four middle grade girls’ horse novels. She lives with her husband in the Columbia River Gorge, loves country life and enjoys taking research trips for her historical settings. She’s taught workshops at library and writer conferences, spoken at churches, historical societies and multiple women’s groups, and looks on her writing as a ministry. Miralee is a past president of Portland ACFW for 5 years, and a licensed lay-counselor through the American Association of Christian Counselors.

Miralee has two new books out this summer! The 12 Brides of Summer

Love Is Buzzing in the Good Old Summertime! Spend the sunny days of summer relaxing with an ice cold glass of lemonade and revel in the dreams of twelve brides who are a bit surprised by how the men of their dreams come into their lives. Journey to the Old West, stay on the prairie, and visit quaint small towns. . .without leaving the comfort of your own front porch!
The dog days of summer are here, but love is still in full bloom with Novella Collection #3: 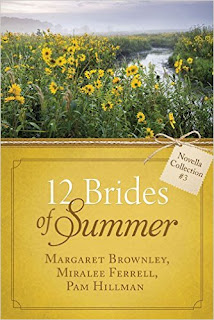 Dog Days of Summer Bride by Margaret Brownley
Music teacher Miralee Davis and blacksmith Tom Colbert don’t realize they’ve been sharing the same dog until. . .it digs up a stash of stolen loot. The reward will go to the dog’s owner—if only that can be decided.

The Dogwood Blossom Bride by Miralee Ferrell
Gracie Addison is a tree-climbing tomboy, and practical Will Montgomery objects to her unladylike influence on his niece. Will his judgmental attitude come back to bite him?

The Lumberjack’s Bride by Pam Hillman
Chicago transplant, Lucy Denson cooks for a logging crew in the Mississippi backwoods until she can return to her idea of civilization. Can Eli Everett help her rethink her ideals?


Mystery Rider, book two in the Horses and Friends series

In the third installment in the Horses and Friends series, thirteen-year-old Kate 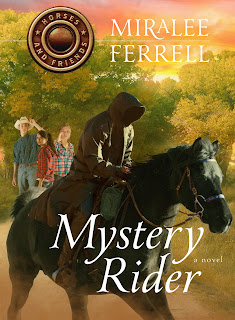 Ferris already has one problem. Snooty, well-to-do Melissa is boarding her horse at Kate’s family stable. When Melissa suddenly turns nice, Kate is shocked ... and suspicious.

The last thing she needs is more trouble. So when a hooded rider appears—and then disappears—on a stunning black horse outside her home, Kate isn’t sure if Melissa is playing a trick or something more dangerous is going on. Either way, Kate and her friends will need an extra measure of faith and courage to solve this mystery.
Posted by Miralee Ferrell at 1:00 AM