The Amazing B-17 Bomber in WWII 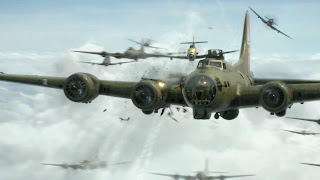 More tension. More conflict. My agent returned a manuscript set in World War II asking for more action. The setting is in the States, but the heroine's husband is a bombardier in a B-17 in Europe, so I decided to garner more action by visiting that scenario.

I had no idea what a fascinating subject I had chosen. The B-17 bomber was an incredible aircraft flown by amazing men. The Boeing aircraft was conscripted into service to man bombing runs into Europe to destroy Germany's industrial capabilities, including aircraft factories and ammunition depots. It became known as the Flying Fortress after a reporter upon seeing the aircraft bristling with multiple machine gun turrets remarked, "Why, it's a flying fortress!" The name stuck, not only because of the protruding guns but also because of the stability of the aircraft. The plane was capable of sustaining hits which would cripple another aircraft, but the B-17 seemed to be able to fly in spite of it.

A crew of ten young men manned the B-17 bomber: the pilot, co-pilot, navigator, flight engineer, bombardier, radio operators, and various gunners. Most of them were between 19-25 years of age. The loss of life was incomprehensible after they began the bombing raids. The German "Butcher Birds" were too fast and the B-17s were virtually sitting ducks as they flew in their static bombing formation. The crew members wrote of being able to see the faces of the German pilots grimacing as they attacked them. However, they had to maintain their formation, otherwise the bombs would go astray and miss the target. 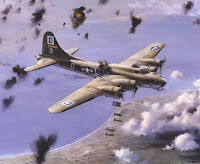 That is until the P-51 Mustangs were brought into service. These amazing fighter planes could outmaneuver the German Butcher Birds and greatly slowed down the loss of American lives. The B-17 crews called them their "Little Friends." They breathed a sigh of relief on the bombing runs after they sighted the Mustangs on the horizon coming to their rescue.

Probably the most famous B-17 was the Memphis Belle. Two movies have
been made about the flying missions of the aircraft. She was one of the first B-17 bombers to complete 25 missions with her crew intact. The crew was subsequently sent back to the States to raise war bonds.


I read volumes on the subject of this phase of our history and watched several documentaries, fascinated by the bravery and sacrifice of the men who flew these missions. I can't even imagine what these men and their families went through. I fear we've lost that kind of valor in our country. I hope not. I salute and honor the veterans who have served our country and are now in the service 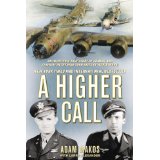 of our country. For a riveting read about this phase of our history, I highly recommend "A Higher Call" by Adam Makos. It relates the true story of both an American pilot and a German pilot and their parallel journies which collide in the sky over Germany.

Do you have a story about a war veteran in your family? Share it with us, and God bless your family for giving in service to our country. I salute my brother, Scotty Keyes, a Marine, who gave his life in combat in Vietnam.

Although a multi-published fiction author, Golden Keyes Parsons’ first published non-fiction work, Spiritual Spring Cleaning, (BoldVision Books) just released in April 2015. Her series, Darkness to Light, (Thomas Nelson) chronicled the journey of her ancestors in 17th century France and was a finalist for ACFW’s Debut Author of the Year in 2008. Her fourth novel, His Steadfast Love, a Civil War novel, was a National Readers Choice finalist. Parsons has also written a biblical fiction series entitled Hidden Faces, Portraits of Nameless Women in the Gospels (WhiteFire Publishing). Golden lives in Waco, TX, with her husband, Blaine. www.goldenkeyesparsons.com.