I was born and raised in Oklahoma, and I’ve always been interested in the land runs--one aspect of our state’s unique history. In case you’re not familiar with Oklahoma, much of the state was designated as Indian Territory in the later half of the nineteenth century. Over forty Indian tribes were eventually moved there because white settlers in other states and territories wanted their valuable land. 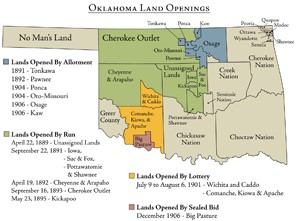 Once much of the West had been settled, people started looking at Oklahoma as one of their last chances to get free land. They pressured the government to open the Unassigned Lands--land that had been promised to certain tribes, but no Indians had settled on it. The government finally agreed, and President Benjamin Harrison signed the paperwork for what was later called Harrison’s Hoss Race.

On April 22, 1889, over two million acres of land was opened for settlement in Oklahoma’s first land run. The homesteads were 160 acres with much smaller town lots also available. Anybody twenty-one and older could ride—women, foreigners, and blacks included. The race began with the blast of cannon and gunfire and a cheer so loud it made ears ache. An instant stampeded ensued. In less than a few hours, all of the homesteads had been claimed, leaving many people disillusioned and unhappy because they didn’t get one. In the first book in my series, Gabriel’s Atonement, my hero and heroine ride in the 1889 land run, which led to the settlement of Guthrie, Oklahoma City, and several other towns.

Joline’s Redemption, which released on November 1st, is the second book in my Land Rush Dreams series. It features the Cherokee Outlet aka Cherokee Strip land run, which was held on September 16, 1893. More than 100,000 hopeful settlers raced for 42,000 claims. I’m sure you can imagine the chaos of such an event. Lucky winners settled in sod homes and dugouts carved from the prairie while others lived in their covered wagons. The first winters were harsh as the land tested the endurance and character of its new inhabitants. Many of the settlers could not endure the harsh conditions, and after weeks or months, gave up their dream. But for those who stayed, hard times gave way to better days as crops flourished and communities, schools and churches rose from the wind-swept plains.

In celebration of autumn and my new release, I'm giving away a copy of Hometown Harvest Cook Book. Just leave a comment with your email address to be entered. 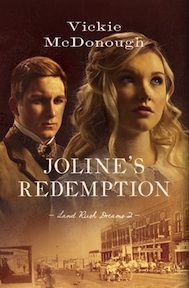 Bestselling author Vickie McDonough grew up wanting to marry a rancher, but instead married a computer geek who is scared of horses. She now lives out her dreams penning fictional romance stories about ranchers, cowboys, lawmen, and others living in the Old West. Vickie is an award-winning author of 38 published books and novellas. Her novels include the fun and feisty Texas Boardinghouse Brides series, and End of the Trail, which was the OWFI 2013 Best Fiction Novel winner. Whispers on the Prairie was a Romantic Times Recommended Inspirational Book for July 2013. Song of the Prairie won the 2015 Inspirational Readers Choice Award. Her latest series, Land Rush Dreams, focuses on the Oklahoma land runs.
Posted by Vickie McDonough at 12:30 AM