Wychwood - Another Unique Estate from Days Gone By on Geneva Lake

The next stop on our tour of 19th Century estates that were built on Geneva Lake in Wisconsin is Wychwood. Actually built in 1902, the estate was named for the wych-hazel plants that populated the grounds. From its inception, Mr. and Mrs. Charles Hutchinson envisioned Wychwood as a sanctuary for wild flowers and wild life, and every part of the home and its property was designed with that purpose in mind.

Hutchinson made his wealth as president of the Corn Exchange Bank. He was active in philanthropic activities, both in Chicago and the town of Lake Geneva. He conceived the idea of a building that still stands on Broad Street in Lake Geneva called Horticultural Hall where gardeners from the lakeshore and local farmers would bring their produce and flowers to market. He also helped to form the Lake Geneva Garden Club, among other similar organizations.

Wychwood was described in Volume 17 of The Architectural Record as one that gives no impression of aggressive architectural prominence and seems to grow with the trees. Many more pictures of the property are included in the article, including that of a wooded island that was reached by a rustic bridge, stables hidden away in the woods to the northwest of the home, and several interior shots. It's our loss that color photography was not available at the time the pictures were taken.


The couple willed the property to the University of Chicago in 1932 for use in the study of wild flowers and wild life, including the development of new strains of plants. Before the University sold the property, it made the estate available for tours and education for local school children. 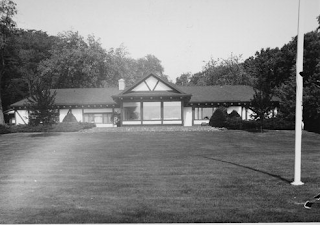 In 1957 a banker by the name of Charles Mitchell purchased the estate and removed the second level to modernize the home into the style of a ranch home. This is how it looked at that time. (Photo from the Wisconsin State Historical Website, Architecture & History Inventory, http://tinyurl.com/j2r9cze) 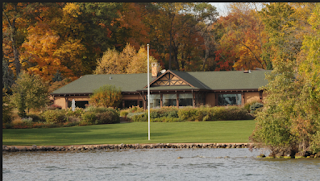 And here is how it looks now. Except for the gable design over the center windows, there is little that gives a hint of the beautiful two-story home that originally was built there.

Shortly after the major remodeling, William Wrigley (of chewing gum fame) purchased the property, which adjoined his own Green Gables estate. It remains in the Wrigley family today.

How do you feel about modernizing what was into looking totally different today? Are you on the so-called side of "progress" or the side of preservation?

A native of Lake Geneva, Wisconsin, author Pamela S. Meyers lives in suburban Chicago with her two rescue cats. Her novels, currently available, include Thyme for Love, which has recently been rereleased on Amazon and her 1933 historical romance, Love Finds You in Lake Geneva, Wisconsin. She expects two more books to be released in 2016. When she isn’t at her laptop writing her latest novel, she can often be found nosing around Wisconsin and other Midwestern spots for new story ideas.
Posted by Pamela S. Meyers at 12:30 AM