Fred Harvey: Taming the West One Meal at a Time

Nothing changed America as much as the iron horse.  People were finally able to travel across country in relative comfort and not have to worry about the weather, Indians, or some of the other mishaps that plagued early travelers.  A train passenger’s greatest fear was food poisoning. That’s how bad meals were along the rails. 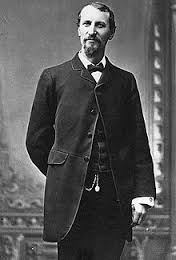 It took one enterprising Englishman to change the way travelers ate. His name was Fred Harvey and his Harvey House restaurants eventually stretched along the Santa Fe railroad tracks from Chicago all the way to Los Angeles and San Francisco—one every hundred miles.
Hear That Whistle Blow
Fred Harvey invented the “fast-food” concept long before Ray Kroc.  Passengers were allowed only thirty minutes to get off the train, eat and board again, so time was of the essence.  He devised a system in which train conductors would telegraph passenger food orders to the restaurant in advance. This allowed the restaurant staff to prepare the food before the train pulled into the station.
From Dishwasher to Household Name
Harvey learned the business the hard way.  After traveling to America at the age of seventeen, he landed a job as a dishwasher at a famed New York restaurant, working his way through the ranks from dishwasher to line-cook.  He eventually landed in St. Louis where he took over the Merchants Dining Room Saloon.  His success lasted only a short time. The winds of war could not be ignored and after his partner joined the secessionist army, taking all the money the two men had saved, Harvey’s restaurant was doomed.

After a series of jobs and personal losses, he eventually took over an eating house at the Santa Fe depot in Topeka.  He arranged for fresh fruit and meat to be railed in from Chicago and other states.  His food was so good that railroad officials worried that no one would want to travel past Topeka.
First Female Workforce
As the number of his depot restaurants increased, so did his troubles. Black men were hired as waiters, but this often created conflict with cowboys.  After one unpleasant midnight brawl at the Raton Harvey eating house, Harvey’s friend Tom Gables suggested a radical idea; why not replace black male waiters with women?   Harvey decided to give Tom’s idea a try.

Harvey ran ads in newspapers for “young women of good character, attractive and intelligent, 18 to 30, to work in the Harvey Eating Houses.” He offered a salary of $17.50 a month, a tidy sum for a young woman.  Soon he had all the help he needed.

The women lived in dormitories above the restaurants under the watchful eye of a house mother.  Their uniforms consisted of a black dress, black shoes and stockings, and a crisp white apron.  The women had to adhere to strict rules and were not allowed to marry for six months.

His new female staff was a great success and helped ease racial tensions. Even the roughest of cowboys and railroad workers were willing to don the required (and dreaded) dinner jacket just for the pleasure of being served a good steak by a pretty girl.
He Kept the West in Food—and Wives
That quote from Will Rogers says it all; Among his other talents, Fred Harvey not only “civilized the west” he was indirectly responsible for more than 5000 marriages. That’s enough to make you want to forgive him for inventing fast-food. Almost….

In case you're wondering, the reason I'm writing about Fred Harvey
is because of my new book. 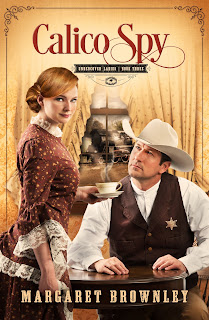