THE LUSITANIA By Golden Keyes Parsons

All history buffs are aware of the tragic sinking of the Lusitania during World War I. That event was probably the catalyst which propelled the United States
into World War I. However, what I was unaware of until researching cruise ships for my protagonist to get to the States from England in 1914 was how luxurious the ship was. Every bit as comfortable and regal as the Titanic, the Cunard Line touted the Lusitania as able to make the trip from Liverpool to New York City in four days. 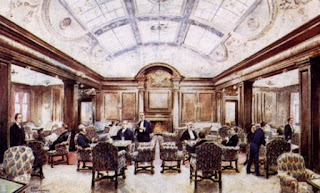 Common to all liners of the day, first, second, and third class passengers were strictly segregated, each class being assigned its own space on the ship. The Cunard Line prided themselves on passenger satisfaction.The ship even accommodated the many emigrants who traveled on the ship with larger dining rooms and comfortable sleeping facilities. 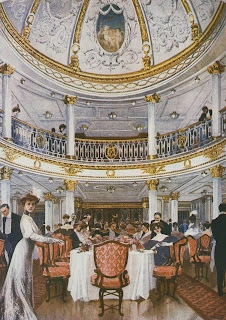 The ship's first class dining room was the most elegant of the public rooms, sporting a crowned ceiling and decorated in neo-classic Louis XVI style. White and gilt carved mahogany panels lined the walls, supported by elaborate columns. The furniture was bolted to the floor for safety measures in lieu of the waves of the North Atlantic. Unique to the Lusitania was a veranda cafe with walls which could be opened up to the deck in warmer weather, which actually proved to be infrequent due to the North Atlantic's harsher weather.

When the Lusitania was built, the British financed it with the understanding that it could be converted to an armed merchant cruiser. Special compartments were designed to carry arms and ammunition. In the fall of 1914 the cruise passenger business fell off considerable due to the escalating war in Europe, but the Lusitania continued to run.

On May 7, 1915, as the Lusitania neared his destination near Ireland from New York, she crossed in front of a German U-20. Some believe the intersecting of the two vessels was coincidence, nevertheless, the German commanding officer
ordered that a torpedo be launched. The torpedo hit the liner on the starboard

bow sinking the vessel with 1962 people aboard in about 18 minutes. The crew scrambled to launch the lifeboats, but the severe list of the ship allowed them to only get 6 out of 48 launched successfully. Eleven hundred and ninety one lost their lives, most due to hypothermia and drowning. A second explosion sent the Lusitania to the bottom of the sea.

A tragic end to a beautiful ship thrusting the United States into a terrible war.

non-fiction work, Spiritual Spring Cleaning, (BoldVision Books) just released in April 2015. Her series, Darkness to Light, (Thomas Nelson) chronicled the journey of her ancestors in 17th century France and was a finalist for ACFW’s Debut Author of the Year in 2008. Her fourth novel, His Steadfast Love, a Civil War novel, was a National Readers Choice finalist. Parsons has also written a biblical fiction series entitled Hidden Faces, Portraits of Nameless Women in the Gospels (WhiteFire Publishing). Golden lives in Waco, TX, with her husband, Blaine. www.goldenkeyesparsons.com