A Cavalry Hero in the Family Plus Giveaway – by Christine Lindsay

Leave a comment to enter the draw to win the trilogy Twilight of the British Raj in Ebook format. Share on social media, and each time your name will be entered the draw again. Winner picked following Sunday.

The Irish are a culture steeped in the oral tradition of handing history down from generation to generation. As a kid growing up I devoured the stories my mother shared with me over the kitchen table of the heroes in our family. One of those heroes was my grandfather’s brother, my great Uncle Eddie who served in the Queen’s Bays, a British Army regiment with a long and illustrious history.

The regiment was first formed in 1685 by merging four of the horse troops that were raised to fight for King James the 2nd, but as the years passed, and so did the crown heads of Britain change, this regiment was then called on to fight against the Jacobite rebellions. It was during the second Jacobite rebellion in the 1700’s that the regimental name was changed to Queen’s Bays, having the Queen as their Commander in Chief. They were sent to places all over the world to fight for Britain’s interests such as Germany, France during their revolutionary wars, Waterloo, Ireland during the fight for homerule, to name a few.

Jumping ahead a bit, we get to the history that inspires me, when The Queen’s Bays were sent to India during the Indian mutiny in 1857, a period during the British Raj (rule) of that exotic southern continent. Besides my great Uncle Eddie, I have other ancestors who served in India as soldiers, but all of the photos in this article are my great uncle's personal photos.

It was just after WW1 that my grandfather’s brother Edward joined this regiment, and he too spent some time in India, and he's somewhere in the photo above.

In my research I found this tidbit, “The Bays during 1939 in England played hard at sport, but also prepared hard for the war that seemed to many to be inevitable.”

Typical cavalry men, they knew how to play hard. Above is Uncle Eddie in India practicing his trade as a cavalry man with his steed and lance, doing calisthenics with his horse, and steeple jumping.


It was in the years between the two world wars that the face of army cavalry changed around the world. Horses were exchanged for tanks, and in 1939, The Queens Bays became part of the newly formed Royal Armored Corps of the British Army.

Before sailing on from England on May 14, the Bays were inspected, first by King George VI, and then immediately afterward by their Colonel in Chief, Queen Elizabeth (the current Queen’s mother). This double-event is quite unique in the annals of the British Army.

See a video of that event, by clicking HERE

Things were pretty tough for the Queen’s Bays in Europe. Being the first of their regiment to become mechanized, there were too many bugs to work out. Sadly, many of the regiment died or were captured by the enemy. My great uncle was one of those who spent time in a German POW camp in Italy. Family stories say that he did eat grass in order to stay as healthy as possible.

But Uncle Eddie was one of those who escaped from that POW camp and made his way to friendly lines.

Many years later during the ‘70’s, my great Uncle was invited to London with the remaining men of that regiment to be inspected once more by their Queen, who by that time was known as The Queen Mother. He is the one marked with the yellow arrow below. 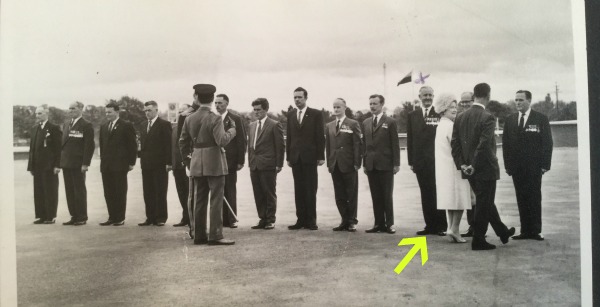 It was stories such as these of family soldiers who fed my imagination. 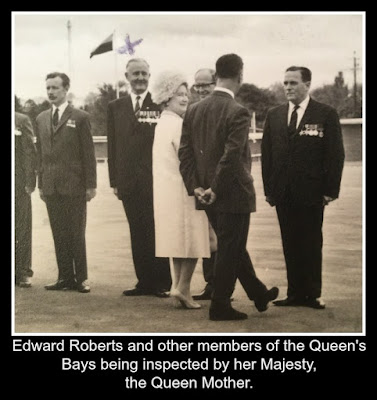 Eventually my romantic brain couldn’t rest until I’d written not one but a trilogy about soldiers who served in the British Army in British Colonial India. That trilogy is the multi-award-winning Twilight of the British Raj, Book 1 Shadowed in Silk, Book 2 Captured by Moonlight, Book 3 Veiled at Midnight.