Fair Field, a Lake Geneva Mansion With a View Like None Other


We are back on our tour of the old mansions of Lake Geneva, WI.  All the homes we’ve visited so far on the tour were situated on the lakeshore. Today we are going to visit a home that was not directly on the lakeshore but built on a very high hill just northwest of the lake. 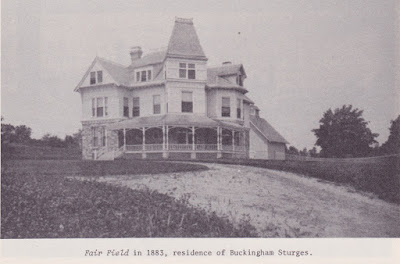 Fair Field was built at a time when nothing had been constructed on the land between the hilltop and the lake except for Main Street which cut through the property. The mansion was built by Buckingham Sturges, brother of George Sturges, whose home, Snug Harbor, I wrote about last October. Click here to read post.

The 15-room mansion originally sat on a 20-acre plot, but by the time Buckingham passed away only six years later, the property line had extended to 65 acres.  His widow and their three children, who remained single all their lives, continued to live in the house until just before the last adult child died in 1955.

The home remained unchanged inside and out for many years.  A visitor to the home in 1935 called a grand piano he spotted as one of the most well-preserved specimens of an era long gone by. The widow told the man her uncle purchased the instrument in 1865 in St. Louis.

The Queen Anne styled home’s first floor was constructed of fieldstone, while the second the third floors were of wood. A broad central hall ran the length of the building. One of the daughters died in 1938, sparing her the heartbreak of seeing the entire home go up in flames two years later. It’s reported that neighbors and school children formed a line and passed along as many of the antiques and belongings that could be brought out away from the fire to safety, but no reference is made of the piano mentioned above.

Instead of rebuilding a second and third story, an attic and roof was added to the first floor which was saved thanks to the stone walls. The brother and sister lived in the one-story bungalow style home from then on untll 1955 when the last surviving child of Buckingham Sturges passed away.

Today, that stone walled bungalow style home still exists on the high hill. Set back from the road and nestled among many trees, people hardly notice the unique design or even know its history. In the early1950s the large acreage was sold to a developer and the subdivision known as Sturwood (a combination of the Sturges name and reference to the large number of trees that grew on the hill) took shape.

As a child, I lived on the edge of the property and remember exploring and coming across the stone walled house. Little did I realize the history behind the home at the time. I just thought it was different and kind of cool.

I recently drove up the hill and found the stone bungalow and paused to reflect on what I know now about the house. In winter when the trees are bare of their leaves the view to the lake, a short distance away, is awesome. It’s easy to see why Buckingham wanted his home to be built on the hill where he had a view of the lake and the surrounding valley. Truly a view like none other.

Are there old homes where you live that have a unique story to tell?


A native of Lake Geneva, Wisconsin, author Pamela S. Meyers lives in suburban Chicago with her two rescue cats. Her novels include Thyme for Love, which has recently been rereleased on Amazon and her 1933 historical romance, Love Finds You in Lake Geneva, Wisconsin. Love is All We Need (the sequel to Thyme for Love) will release in 2016, and Second Chance Love from Bling! Publishing, will release in January 2017. When she isn’t at her laptop writing her latest novel, she can often be found nosing around Wisconsin and other Midwestern spots for new story ideas.
Posted by Pamela S. Meyers at 12:30 AM