Spanish explorer, Juan Ponce de Léon, is probably best known for his fabled search for the 'fountain of youth' in Florida. However, his major exploit was conquering and settling of Puerto Rico and the exploration and naming of Florida.

It is believed that Ponce de Léon was born into a noble family in 1460. As a page in the court of King Ferdinand of Aragon, he received an excellent education and became fascinated with exploring. In 1492, he took part in the conquest of Granada, located in Southern Spain. This ended the presence of the Moors on the Iberian Peninsula after more than seven hundred years and secured de Léon’s position with the Spanish crown.

It’s thought, although never proven, that in 1493 Ponce de Léon was a member of Christopher Columbus' second voyage to the New World. What is known for sure is that in 1502, he was living in Hispaniola, which is the modern day island Haiti and the Dominican Republic. There he served as a military captain and helped stop a native uprising. This led to his appointment as the provincial governor of the eastern half of Hispaniola.

In 1508-09, rumors of gold on the nearby island of San Juan Bautista (modern day Puerto Rico) prompted the Spanish crown to give Ponce de León authorization to explore the island.  Though he may have, unofficially, previously sailed to the island before that. On the official expedition, he took fifty soldiers and a single ship. He founded a settlement at Caparra, near what is now San Juan. When he returned to Hispaniola for supplies, Ponce de León was named the governor of Puerto Rico, but he had many rivals and was soon displaced.

Encouraged by Spanish royalty to discover more lands, Ponce de León set sail from Puerto Rico in March 1513. He would follow rumors he’d heard from local Indians about an island known as Bimini. The locals claimed along with gold; Ponce de León would find a magical spring whose waters would rejuvenate those who drank from it.

In April of the same year, the expedition landed on the coast of Florida. At the time, Ponce de León thought that he had landed on another island. He named the location Florida, due to the area’s lush foliage and also because they landed around Easter time. On his first expedition to Florida, Ponce de León explored the east coast, the Florida Keys, and discovered the Gulf Stream. He then returned to Puerto Rico.

Ponce de León’s next voyage was to Spain. He used the warm Gulf Stream ocean current he’d discovered to speed up his trip. While in Spain, he was named the military governor of Bimini and Florida and given permission to colonize the region. The Spanish crown also ordered him to organize an army to subdue a native uprising in Puerto Rico. He returned to the New World with a small fleet in mid-1515.

In February 1521, Ponce de León departed San Juan on his second expedition to Florida. He intended to found and occupy a colony, so he took with him three ships and approximately two hundred people. They landed near what is now Charlotte Harbor on the southwest coast of Florida. The exact circumstances of what happened next are uncertain, but apparently in early July local Indians attacked the party of settlers, leaving Ponce de León fatally wounded by an arrow in his thigh. His comrades sailed back with him to Havana, Cuba, where he died.

Juan Ponce de León was ruthless when the occasion called for it, but he was also ambitious and hardworking. He built a small financial empire of his own and helped Spain colonize the Caribbean. 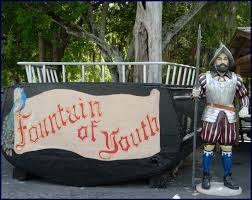 By all accounts, Juan Ponce de León was far too practical a man to waste time on such fantasies as a fountain of Youth, and there is no official record that he ever deliberately searched for it, but strangely, he did acknowledge the existence of the fabled magical waters in his memoir. So is there a spring of rejuvenating water that can keep us young forever? We may never know…

Michele Morris’s love for historical fiction began when she first read Laura Ingalls Wilder’s Little House book series. She grew up riding horses and spending her free time in the woods of mid-Michigan dreaming of days-gone-by and knights-in-shining-armor. Therefore, it only makes sense that she now writes historical romance with a touch of suspense. Married to her high school sweetheart, they are living happily-ever-after with their six children, three in-loves, and six grandchildren in Florida, the sunshine state. When not spending time with her large brood or writing, Michele enjoys photography, genealogy, and cooking.