The Torment of Sarah Winchester

Leave a comment for a chance to win The Gilded Curse.

When Sarah Pardee married William Winchester in 1862, she enjoyed a life of extravagant luxury. Winchester, manufacturer of the Winchester repeating rifle, became a very wealthy man through the sale of his guns, and the couple were among the elite New England society.

But in 1866, the death of their infant daughter threw Sarah into a depression from which she never emerged.  Several years later, she lost her husband to tuberculosis, and her grief was overwhelming. Sarah sought the counsel of a Boston medium to reach her beloved dead family members.

The medium told Sarah that spirits of those killed by the Winchester rifle – Civil War soldiers, American   Indians and others – had sought revenge by the death of her husband and daughter. She also told Sarah they would kill her too, unless she moved out West and built a great house for the spirits. In addition, Sarah was told construction on the house must never end in order to appease the spirits and keep her alive, perhaps even give her eternal life.

Sarah followed the medium’s suggestions, and in 1884, she moved to the Santa Clara valley just outside San Jose, where she bought a farmhouse and property to build her mansion. Contractors were hired to work in round-the-clock shifts so the work never stopped. What began as an eight room  house became a seven story mansion over the next thirty-eight years, and her property grew to 160 acres of orchards and  imported plants.


One of the wealthiest women in the country after inheriting twenty million dollars and stock, money was no object as she built her house. The finest materials were imported for the home, some which were never used by the time of her death. Sarah paid her workmen double the going wage for that era, so they didn’t argue with her eccentric plans.

Sarah never had a blueprint drawn, rather she held a séance in a special room each night to sketch the next plans for the house. Built to please the good spirits and hide from the evil ones, staircases went nowhere, or went down then up, hidden passageways were installed, and doors led to nothing.

Often her plans involved tearing apart rooms that had just been finished to rebuild them another way, which also explained the stairs and doors that led nowhere.

At first, Sarah entertained neighborhood children on her lawn, but eventually her arthritis forced her to become more reclusive.

After the 1906 earthquake which resulted in her being trapped in a front bedroom, she decided the spirits were angry with her and had the front of the house, including a grand ballroom that was never used, sealed up.  She supposedly slept in a different bedroom each night, using various passageways to get around the house and confuse the spirits.

When I visited the “mystery” mansion, tourists were warned to stay with their guides because one can still get lost among the erratic maze of the house’s layout.

There are many more odd and interesting details about the house, but I’ve run out of space.  For more information, see www.winchestermysteryhouse.com.

So, do you think Sarah Winchester ever had peace from the spirits that haunted her?  She’s one more of the sad examples that shows money can’t buy happiness. 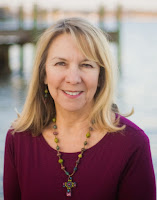 Marilyn Turk has been published in Guideposts magazine, Guideposts books - A Joyful Heart and A Cup of Christmas Cheer, The Upper Room, Clubhouse Jr. Magazine, Chicken Soup for the Soul, and Lighthouse Digest magazine. Her book, Lighthouse Devotions was published in 2015, and The Gilded Curse, a historical suspense novel, was released this month. Her weekly lighthouse blog can be found at http://pathwayheart.com. She lives in Florida with husband Chuck and enjoys boating, fishing, tennis, and gardening when she’s not climbing lighthouses or playing with her grandsons. 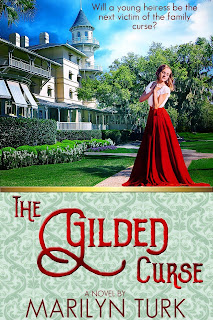 It's 1942, and Lexie Smithfield, heir to her family’s fortune, journeys to Jekyll Island to dispose of the family vacation home her deceased mother told her was cursed.  But mysterious events threaten her safety, and only Russell Thompson, a childhood friend, can help her discover the truth before she is caught in a trap that threatens her very life.
Posted by Marilyn Turk at 12:30 AM