Jefferson, Texas, is located in far East Texas close to the Louisiana border and is one of the most popular tourist attractions in the area. Nearly every building in the main section of town sports an historic marker. In fact, Jefferson boasts of the most registered historic homes in the state. The Caddo Indians originally owned the land. A natural dam

more than 100 miles long had formed north of Natchitoches, Louisiana, in the Red River causing the Caddo Lake to rise, enough so that major commercial river boats from as far away as St Louis and New Orleans were able to travel inland to Jefferson.


By 1845, steamboats were regularly reaching Jefferson, some with as many as 130 passengers or more aboard. At its high point, it was not unusual for Jefferson to receive upwards of 250 paddle boats per year. By the late 1840s Jefferson had emerged as the leading commercial and distribution in Northeast Texas and the state's chief inland port, second only to Galveston. For more than 30 years, the port of Jefferson served as the primary entry point for settlers, immigrants, and supplies from the east.


The historic homes alone in Jefferson are worth the visit--carefully restored and graciously hosted by knowledgeable docents. And the town supports two, yes, to allegedly haunted hotels ... the Jefferson and the longest continuously operating hotel in Texas, the Excelsior House Hotel. We have stayed numerous times in the Excelsior House and enjoyed the sumptuous Southern breakfast the next morning with their signature orange blossom muffins, but the claim that the hotel is haunted is a bit unnerving. I must admit. 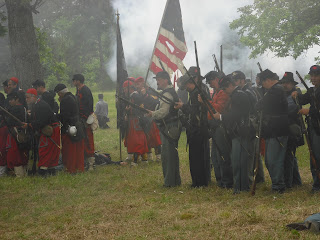 After Texas voted to secede from the Union, men from Jefferson volunteered for military service in great numbers, pledging their allegiance to the
Confederacy. During the Civil War, Jefferson served as a vital supply point for the South until the Port of New Orleans fell under blockade by Northern naval forces. Jefferson now holds an annual Civil War enactment where the town is resplendent with men in Confederate uniforms with a southern belle on their arms on every street corner. And battle scenes are re-enacted outside of town for interested tourists.

The town had been scheduled for destruction and to be set ablaze by the advancing Northern troops, as had been the eventual fate of many of her sister cities during the last days of the War. Thankfully, Jefferson was spared, aiding its early return to prosperity, even in the wake of Reconstruction. By 1870, it was recorded that over 200 new buildings were in the works. The town reached its peak population just a few years after the Civil War and is reported to have exceeded 30,000. During this time, Jefferson was the sixth largest town in Texas. 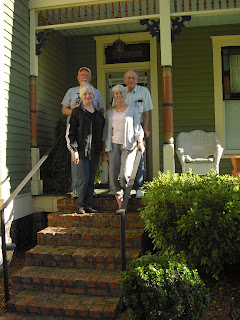 However, two events changed the course of Jefferson's future. The railroad which ran from Marshall to Texarkana bypassed Jefferson, and the natural dam was broken up by the US Corps of Engineers deeming it a navigational hazard. Both of those actions changed the commercial face of Jefferson and the population and trade dwindled drastically. Today it is basically a tourist attraction.

Have you ever visited Jefferson, TX? Leave a comment, and I'll send you the recipe for the yummy orange blossom muffins!

Golden Keyes Parsons is a multi-published historical fiction author. Her series, Darkness to Light, (Thomas Nelson) chronicled the journey of her ancestors in 17th century France and was a finalist for ACFW’s Debut Author of the Year in 2008. Her fourth novel, His Steadfast Love, a Civil War novel, was a National Readers Choice finalist. Parsons has also written a biblical fiction series entitled Hidden Faces, Portraits of Nameless Women in the Gospels (WhiteFire Publishing). Golden lives in Waco, TX, with her husband, Blaine. www.goldenkeyesparsons.com
Posted by Unknown at 2:00 AM