Misty of Chincoteague - the World-Famous Horse

So...who wanted to race out and book tickets to attend the 91st annual Pony Penning Day after reading last month's post? *grins* Not too long and we'll be celebrating the 100th anniversary of the event. I bet that will be a celebration not to miss!

Next year is the 70th anniversary of the year Misty of Chincoteague (the novel) was published. That's why my focus this year is on the little island and the horse and the author which made it famous. If all goes well, the first book in my series set on Chincoteague Island will release next year, and a special nod will be given in tribute to Misty, as well as my grandfather, who would have been 6 years old and running around the island at the time my first book is set.

If you missed last month's post, you can view it here: http://www.hhhistory.com/2016/03/wild-pony-island-swim.html. 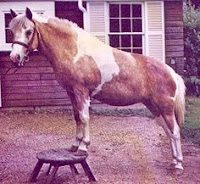 What would this tiny little island be if not for the horse born there which went on to become a beloved children's book feature character and who delighted children all over the world? 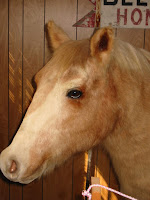 Misty of Chincoteague was born on July 20, 1946 at Beebe Ranch on Chincoteague Island, sired by the chestnut pinto Pied Piper. Misty's mother was the smokey black pinto Phantom. Misty stood 12 hands tall and had very unique markings on her coat. What looked like a map of the United States on one side and a blaze shaped like the state of Virginia on her forelock tied her to her home state and country. 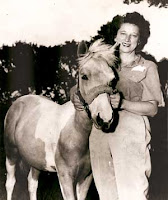 Marguerite Henry first visited Chincoteague in 1946 to attend the annual Pony Penning in the hopes of finding a story to write for a book. When she met Misty, it was love at first sight. She wanted to buy Misty to take back with her as the model for her book. Clarence Beebe at first refused, but once Mrs. Henry promised to include his grandchildren (Paul and Maureen) in the book, he agreed. Misty was sold for $150 and once weaned was shipped to Mrs. Henry.

Misty arrived at Mole Meadow in Wayne, Illinois on November 18, 1946. She stayed with Mrs. Henry for over ten years, appearing at schools, movie theaters, museums, libraries, and horse shows. Misty was trained to ride and perform tricks such as standing on a stool and shaking hooves. After Misty's book became a bestseller, the publisher Rand McNally rewarded Clarence Beebe with a $350 check as a thanks for loaning Misty to Mrs. Henry for inspiration. So, "Grandpa" was actually paid $500, which today would be about $5,000! Not a bad payday just for loaning out your horse. *grins* 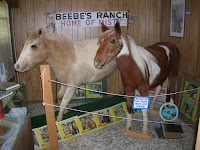 Misty was sent back to the Beebe's in 1957 for breeding. A goodbye party with over 300 children and 160 adults in attendance was held at Mole Meadow. Misty remained on Chincoteague for the rest of her life where she died in October of 1972 at the age of 26. She was taxidermied and preserved then put on display at the Chincoteague Miniature Pony Farm, where she and her last foal (Stormy) remain today.

Misty may have left us, but she lives on through her books, her descendants, and the millions of people around the world who have read, and will read her story. As Ida "Grandma" Beebe was famously quoted in A Pictorial Life Story of Misty, "Nothing dies as long as there is the memory to enfold it and a heart to love it."

* Have you ever read or heard of the book, Misty of Chincoteague, or seen the movie, Misty? What do you remember about it?

* Have you ever read a book or seen a movie where a horse was the featured "star"? What was it and what did you like most about it?

* Do you have a favorite book or movie based on an animal? What is it and why is it a favorite?

Leave answers to these questions or any comments on the post below. Next month, I'll be covering the BeeBee family and their ties to the island. Come back on the 9th of April to find out more.