In February and March, we learned about the spiritual awakening which spread across Eastern Europe prior to WWII. If you missed those posts and would like to read them, here are the links:

A Pre-WWII Great Awakening in Europe

After witnessing the changes taking place in the churches of Czechoslovakia, the chief physician for the Hungarian Railway, Dr. Alexander de Csia, invited Evangelist James Stewart to hold evangelistic meetings on behalf of the Evangelical Alliance of Hungary. Dr. Csia was burdened to see God work in his country, refusing to accept the attitude of many that revival in Hungary was impossible.

Stewart enlisted Christians to pray “around the clock,” and the participants each dedicated one hour a day for prayer. The first meetings were held in a small Methodist Hall in Budapest, but after two days the services moved to the larger building of the German Baptist Church. After two or three more days, the crowds overflowed this location. During the second week, the meetings moved to the big Reformed Church, seating 2000 people. Soon the overflow crowd had to stand in the center aisle during the entire service.


Just like he had done in other Eastern European countries, Stewart had scripture choruses and gospel songs translated and printed in booklets so everyone attending the meetings would have a copy. He introduced "Into My Heart," "Jesus Never Fails," "Yes, I know," "Wounded for Me" and other songs. It wasn’t unusual to hear these tunes hummed in shops and whistled by delivery boys riding their bicycles down the street.

James Stewart shared the message of John 3:16 and invited those who wanted to give their hearts to Christ to leave their seats immediately and go to the front. Hundreds of people surged forward, making their way through the overflow crowd in the aisles.

More prayer meetings formed in other parts of Budapest, and many Christians attended morning meetings on God’s plan for living a holy life. They left these meetings “determined to make things right in their own lives.” The campaign ended before Christmas but began again in 1938. The organizers rented the biggest concert and dance hall in Budapest, the “Redoubt.” In a few days, the crowds filled and outgrew the location.

Andi Ungar, a Christian Jew, interpreted for Stewart at many of the meetings, and he and Ungar spoke as if they were one person. Anti-Semites criticized Mr. Ungar’s role in the meetings, but Stewart and the other leaders ignored the criticism.


A great outpouring of the Holy Spirit took place in the city of Debrecen in eastern Hungary. Debrecen had long been called “The Geneva of Hungary” and “The Calvinist Rome.” Services were held at the Reformed Seminary, established 300 years earlier. In addition to the evening gospel services, meetings for women and girls, for children, for prayer, for youth, and for Bible study carried on day after day. Many shared of the work God was doing in their hearts.


In the spring of 1938, Stewart held his last campaign in Budapest in “The Tattersall,” a horse riding academy. At the end of each day, “hired laborers quickly cleaned the huge arena, put down fresh shavings, and arranged 4000 chairs which had been rented for the purpose.” The chairs were gathered and stored after the meeting each night. Members of the Salvation Army and different Baptist groups formed a brass orchestra which accompanied the revival songs. Several thousand people attended the meetings each night during the two-week campaign. On the final Sunday, over 5000 young people from Budapest and the surrounding towns and villages gathered for a youth rally.

James Stewart left Hungary in 1938, but the revival continued to spread across the country, led by the Hungarian people. More souls turned to Christ. More hearts and lives were changed. Stewart returned to Hungary for short visits in 1939, 1940, and in 1946 after WWII. He was overjoyed to witness the revival fires still burning, despite the ravages of war.

Cindy Stewart, a high school teacher, church pianist, and inspirational historical fiction author, was the historical category winner for ACFW’s 2014 First Impressions writing contest, a 2014 Bronze medalist in My Book Therapy’s Frasier contest, and tied for second place in the 2015 South Carolina ACFW First Five Pages contest. Cindy is passionate about revealing God’s handiwork in history. She resides in North Georgia with her college sweetheart and husband of thirty-four years and near her married daughter, son-in-law, and three adorable grandchildren. She’s currently polishing her first novel, Abounding Hope, set in Eastern Europe at the start of WWII. 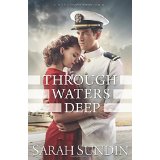 Giveaway  Leave a comment below to be entered in a drawing for Sarah Sundin's WWII novel, Through Waters Deep. Share on social media and let me know for an extra entry. Don't forget to leave your e-mail address and tell me if you shared. The giveaway ends Sunday, 4/3/16, at
9 PM EST.
Posted by Cindy Kay Stewart at 12:30 AM