I stumbled onto these tidbits after noticing a picture of an Opera House in New York, not the Met but another and discovered what has been referred to as Green's block because it took up an entire city block in Woodbury, NJ. 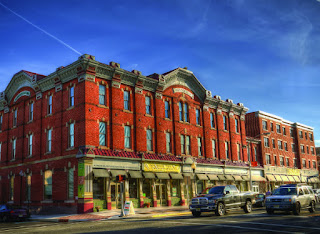 •Built in 1880 by Col. George Gill Green (patent medicine entrepreneur who earned his money by mass marketing 'medicine')
•It takes up a whole city block located on E. Centre and Broad Streets and was placed on the National Register of Historic Places on July 25, 2001. The building, after its heyday as an opera house and theatre, was home to various retail firms.
•Location on Broad Street, Woodbury, NJ

Today the building has been restored and is now used for Senior Housing and other community activities. You can read more about it with this link.
From Opera House to Senior Housing

•Oddly enough an earthquake was the catalyst to restore the building.

And finally here is a picture of Col. George Gill Green.

Lynn A. Coleman is an award winning & best-selling author who makes her home in Keystone Heights, Florida, with her husband of 42 years. Lynn's latest novel "The Shepherd's Betrothal" is the third book in her Historical St. Augustine, FL. series.