Stone Gates (Formerly A Home of Many Names - Tyrawley)

I’m back for another stop on our tour of the old mansions that once graced the shoreline of Geneva Lake, the second largest fresh-water lake in the state of Wisconsin (Green Lake being the first). 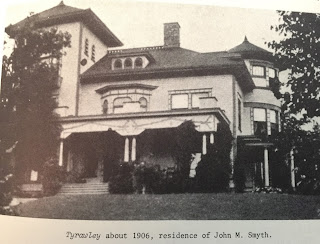 This month we’re going to stroll down the shore path past several other properties to Tyrawley. This home has gone through several metamorphoses—both in appearance and in name—over the years.

The original owner of the estate, John M. Smyth, was born on the high seas during his parents’ crossing from Ireland in 1843.  By the time he was 13, his father had already passed away and he left school to start work in the composing room of the Chicago Tribune. At the age of 23 he had managed to save enough money to start a small furniture store, which was later destroyed by fire. Determined to not let the loss get him down, he built a new building on the same spot as the first. The store stood for many years and was well known to most Chicagoans. In fact, many will remember the radio commercial that instructed people how to pronounce his name. “Some call it Smith, but we call it Smyth" was the slogan. The ‘y’ in the name was pronounced like a hard ‘i’. 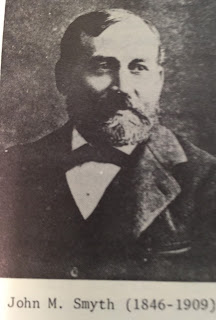 Smyth was a well-liked man and was even encouraged to run for mayor of Chicago on the Republican ticket, but he refused.

In 1892, the family visited the Lake Geneva area, and when Smyth was offered 28 acres on the lake’s north shore, he snapped it up and engaged a Chicago architect to design a California Mission style home. The foundation was composed of native fieldstone, while the rest of the home was constructed of wood, which was painted light grey with green trim.

The interior sported a large fireplace mantle of African marble and white oak. It’s carved staircases were designed with broad landings, and gold-plated hardware was installed throughout the first floor.

A large carriage house that included a living quarters for the coachman, matched the main house, as did all the utility buildings. Like a lot of the estates on Geneva Lake, Tyrawley had it’s own yacht, The Loreto, which was used to meet the family in Williams Bay when they came by train from the city and, later, to ferry Mr. Smyth across the lake to the country club for a game of golf. 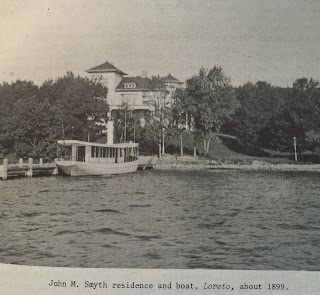 Mr. Smyth died in 1909, and the family held the estate for two years before it was sold. Thus began a series of owners, the first two in rather quick succession before W.H. Alfords purchased the estate and changed its name to Stone Gates.

William H. Emery, a long-time Geneva Lake shore resident, purchased the property in 1937 and kept the name of Stone Gates. The Emerys extensively changed the exterior of the home by removing the towers and the third floor. The home is still owned by the Emery family today

As I was first preparing this post, until I read about the Emery family purchasing it, I didn’t realize this home was the same property that a personal friend's father worked for as its caretaker. It looks so different today than it looks in the picture. My friend's family lived in the building that served as the couch house for the estate back in the day. Now, instead of carriages filling the drive-through garage area, cars are parked in there. It was still painted light gray and green the last time I saw it. When I recently told my friend what I had learned about the property and the home she grew up in, she said that horse stalls were in a room next to the large garage that opened at either end (from its carriage house days).

I do vaguely remember that room with the stalls from the times I visited her at that house. But back then I wasn't the history buff I've become, at least when comes to my hometown and the lake.

Have you learned historical facts about places you've known all your life but never cared about its historical significance until many years later?
UPDATE: 7/19/2020, If you previously read this post when it was first published in 2016, some of the detail I had included was not correct, and I have edited the post to correct the information. I apologize if any of my readers were as confused as I was. If I am able to acquire any current pictures of the home I will publish them here.

A native of Lake Geneva, Wisconsin, author Pamela S. Meyers lives in suburban Chicago with her two rescue cats. Her novels include Love Finds You in Lake Geneva, Wisconsin, and Safe Refuge, Shelter Bay, and Tranquility Point (all part of a historical series set in Lake Geneva). When she isn’t at her laptop writing Rose Harbor, the next book in her series, she can often be found nosing around Wisconsin and other Midwestern spots for new story ideas.