We think of auto racing as a modern phenomena. And yet auto racing has not only been around since practically the invention of automobiles, it was extremely popular and big business in the years before World War I.

Take 1916, for instance. As war raged in Europe, Americans were as yet unaffected (for the most part). They continued on with their lives, with their work and their pleasures. And for many people, following the men with the courage to get in a new-fangled automobile and drive at unheard of speeds either around a track or across the country, had become one of their pleasures. Throngs attended races in person. Even more followed the results in local newspapers.

There were national and international stars, just like today. And outrageously expensive race tracks, like the one in Cincinnati that cost around $1 million to build. Races promised excitement, danger, money to be made–all very much like the sport today.

Races even at tracks were different lengths. For instance, Cincinnati’s inaugural event was a 300 hundred mile race with a $30,000 purse. Twenty-nine cars entered. Seven finished. All watched by 50,000 spectators! (A race in Philadelphia was said to have drawn a crowd of 400,000.)

On the other hand, the Harvest Classic, a race held at the Indianapolis Motor 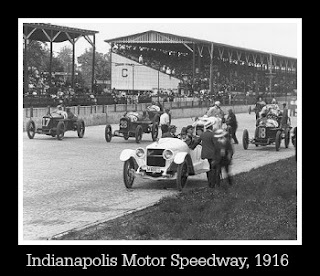 When I tell people about the history of auto racing in the years before World War I, I often get a scoffing look, followed by, “But those cars only went about 25 mph, right?”

Actually, no. In these years prior to World War I, drivers competed at speeds between 80-100 mph. If you think those are scary speeds to drive these days, consider the rest of the experience for these early daredevils. 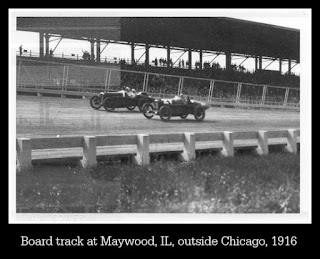 Many of the race tracks were made of wooden boards, not asphalt. Boards that would get slick with rain or dripping oil or any other kind of substance. Boards that might be uneven in places. Or rough. I can’t even imagine the level of noise generated by all the cars rattling all those boards.


But driving on a board track wasn’t the only danger for these early drivers. Here is a close up view of a 1916 race car. 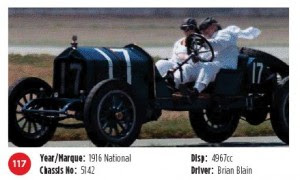 Can you imagine? No doors. No seatbelts. And remember, they were traveling close to 100 mph! Also notice there is no top, no windshield. The air rushing into these drivers’ faces, generated by their speed, was laced with gasoline, burning oil and rubber and all kinds of other substances. In fact, when a driver finished a race, his face had a layer of these pollutants plastered to his face, often rendering him unrecognizable.

Notice, too that there are no mirrors on the car. How did a driver see the competition? He didn’t see much. That was the job of the 2nd man in the car, the mechanic—a requirement in the early years of auto racing. The mechanic watched the cars before, behind and beside them as well as keeping an eye out for other obstacles and knowing how to fix the car should it malfunction. This might have been an even scarier position than driver, given that this man had no control over the car. He had to really trust his driver! I have a huge respect for the skill and courage it took to get into one of these early racing cars and drive it up to 100 mph beside other cars doing the same speed on a track slick with oil in air so thick with smoke you could hardly see.

1917 and 1918 saw a significant decrease in auto racing in America, with automobiles, gasoline, and men needed for the war effort. Many tracks were disbanded or repurposed. As the war ended, the depression came, further stalling out the auto racing craze that had existed before the war. Of course auto racing never ceased completely. And it eventually grew again, until it is the sport it is today. But now you know a little bit about its beginnings and those who pioneered both competition and speed.

If you enjoyed this history of pre-WWI auto racing, check out At Every Turn 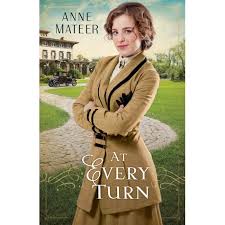 (2013 Carol Award finalist) by Anne Mateer and meet Alyce Benson, a young woman passionate about auto racing and missions in 1916. Available in print and ebook.


Anne Mateer enjoys reading about and visiting history then bringing it to life through fiction. She is the author of four historical novels. Anne lives in Texas with her husband of 29 years. They are the parents of three young adults. 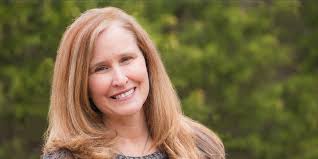 Read more about Anne Mateer on her website http://www.annemateer.com/
Posted by Christine at 12:30 AM