On Sunday, August 13 I'll pick the winner of the Ebook Giveaway of Finding Sarah Finding Me. Leave a blog comment below to enter.

Back in 1999 when I was a single mother about to give birth to a baby, I didn’t think much about the history of adoption. The concept of someone raising someone else’s child as their own was an ancient idea. My first thoughts as a mother considering the relinquishment of my baby was of Moses.

There is a great deal of literature around the subject of adoption, just think of many a Dicken’s novel and you’ll notice his interest in the vulnerability of parentless children, such as in David Copperfield, Nicholas Nickelby, or Pip and Estella in Great Expectations. There is evidence that Charles Dickens took a great interest in the welfare of children at a London Foundling Hospital that clearly shows in his novel Oliver Twist.

But our modern-day idea of legally changing a child’s name and parentage is fairly new as far as the US and Great Britain is concerned. In both countries we find more written from the standpoint of contemporary social workers and the perspective of sociologists on the history of child welfare in regards to child abuse and the plight of single mothers than on adoption itself. As far as history goes, there was no formal legal groundwork until the mid 19th and early 20th century. However, adoption has existed from the beginning of the human race.

When I was pregnant and unmarried, I felt the age-old anguish of the millions of women in the same situation—I needed someone to reach out and take my child and care for my child as if it were their own.

Before formal legislature was laid down though, the closest arrangement would be that of wardship where the local courts gave custody of a child to a guardian.

Sadly, in Britain, the whole boarding out idea often ended up as neglected 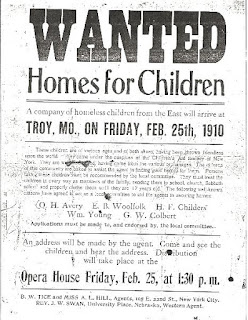 children being placed in workhouses or orphanages. In the US, children had been transferred to foster parents since colonial times, and often children were placed into the roles of indentured servants. All of this was eased by the lack of formal process in the recording births and the changing of names. Due to economic need, parents were unable to provide for their children, and other farm families needed laborers.

In both Britain and the US the concept of fostering or warship resulted in heightened child abuse and neglect especially with the industrial revolution. 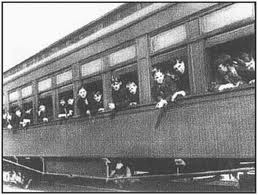 History records the plight of children such as those in the orphan trains between 1854 and 1929. One such stories is that of William and his brother Thomas. They rode the Orphan Train in 1880 at the ages of 11 and 9, respectively. William was taken into a good home. Thomas was exploited for labor and abused. The brothers eventually made their way back to New York and reunited.

Not until The First World War, with pressure from various child rescue organizations did adoption laws gain strength for the welfare of children, created and improving adoption laws to what we know today.

As late as the 1920’s there was no legislature to protect the confidentiality of adoption records. Birth certificates were not altered or sealed until the 1930’s, thereby protecting intrusions into adoptive and birth-families from each other.

The reasoning for this practice was for the benefit of each member of the adoption triad—the adoptee, adoptive parents, and birth-parents. The social stigma of that time of being born-out-of-wedlock cast a long shadow.

Even me as late as the 1970’s felt that stigma as an unmarried mother. Long after I met my husband and we raised our own children, I kept my firstborn a secret from the children I raised.

In the early to mid 20th century adoption reached its height in numbers of Anglo babies born to unmarried women who had little social option but to give up their infants. Everyone in the adoption triad back then was persuaded to put the past behind them and get on with their lives.

Not until the late ‘70’s and ‘80’s did adoption laws begin to change and an openness began.

But when I was a young pregnant mother in 1999 about to relinquish my baby girl to adoption I didn’t know the history. I did however trust a Christian adoption agency to place my little girl into a home that would give her everything I desired for her.

Many years later I began to study the history of adoption, as I looked forward to the day I could legally be reunited with my daughter. Next month I'll write more on the history of Adoption, of some of it's disasters and successes. As for mine and my birth-daughter's story--it will be released by WhiteFire Publishing this August 2016:

Go here to read more about the book Finding Sarah Finding Me: A Birthmother’s Story. 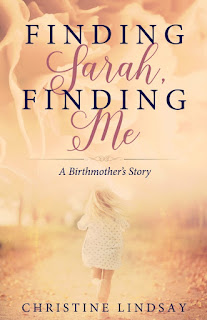 Read more about Christine Lindsay and her multi-award-winning novels as well as her non-fiction on www.christinelindsay.org