Our hearts break when confronted with the suffering of refugees. We want a solution for homelessness. We can be tempted to think it's a relatively new problem. It's difficult to believe that in 1848-49, an estimated ten thousand vagrant children roamed New York City. After the Civil War, Boston had an estimated 6,000 vagrant children, New York at least 30,000. 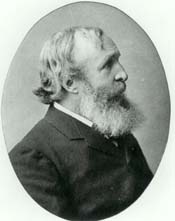 Enter reformer Charles Loring Brace, a New York reformer who "resolved to make use of the endless demand for children's labor in the Western country." Brace had come to New York to complete seminary training. Horrified by the conditions of children on the streets, he resolved to help them. He founded the Children's Aid Society, resolving to raise funds and obtain the necessary legal permissions to relocate children.

Moving children from homelessness to a place where they would have food, shelter, work, and the possibility of an education seemed a good that could be done for thousands of unfortunate children. Brace's system of "placing out" eventually became the model for many such programs. Together, these programs removed at least 200,000 children, men, and women, from the city to the country. 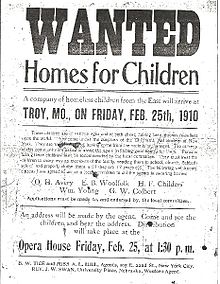 What if either side of the agreement was unhappy with an arrangement? The Children's Aid Society agreed to pay a child's fare back to New York if an employer was not satisfied. The society also reserved the right to remove a child if a new home proved unsatisfactory. Employer's promised to provide proper care and education.

Surprisingly, many children who boarded "orphan trains" were not really orphans. Impoverished, desperate parents who could not care for children sometimes relinquished them to the Children's Aid Society. Those who took in children or found employment for placed-out adults were perceived as performing a Christian duty, and those who served as agents were often seen as serving in a home mission field.

It doesn't take much imagination to realize such a system had the potential to provide wonderful homes for some children ... and horrible tragedy for others.

Can you imagine what it was like to be a child who had known only the streets of New York City or Boston ... and then to be taken off a train (after an exhausting ride) and to a home on a farm? Being expected to help with chores? Would you have been terrified of cows? What if your job was suddenly to milk one?

How often in human history has a solution motivated by good will created unforeseen problems? And yet ...

To learn more about the orphan trains, you might want to watch the PBS special on the subject. Learn more about it here: http://www.pbs.org/wgbh/amex/orphan/ 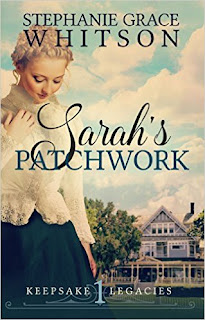 The moment I saw the child in this photograph, I knew I'd found the inspiration for Sarah Biddle, "my" orphan train character for Sarah's Patchwork. I love the "attitude" and the inner strength of character I think I see in her pose.

Learn more about the novel based on this aspect of real American history here: