When my maternal grandfather, Tillman Harrison Jameson, was a young man, doctors sent him from Texas to Cañon City, Colorado, to “take the waters” and clear his burdened lungs in the dry, pristine air of the Rocky Mountains.

I never knew this grandfather, for he died before I was born. But my mother often spoke of her father’s recuperative six-week stay in Cañon City near an incredibly deep gorge. Little did I know that someday I would live in that very city, walk across a bridge spanning that very gorge, and discover the history of the Hot Springs Hotel where people came from miles around to “take the waters.”

For centuries, hot springs steamed near the mighty Arkansas River of southern Colorado as an anomaly against the rugged Front Range. And it was exactly this unusual hot spot that drew the Native Americans, trappers, and traders to winter in the mild climactic area, not far from the mouth of a 1,000-foot gorge known today as The Royal Gorge.

History tells us that explorer Zebulon Pike and company camped at the hot springs in 1806. In the early 1860s, a group of hardy West-seekers claimed the surrounding fertile land of the upper Arkansas River Valley and Cañon City was born.

The local Ute tribe touted the curative powers of the springs, and within twenty years settlers had built a bath house upon the site cupped protectively in the shelter of granite outcroppings. No gentle rolling foothills here, perhaps a brutal surprise to settlers traveling from the Midwest or the Appalachians. For the Rocky Mountains jut suddenly from the plains with seismic impudence.

Historian Ruth Stinemeyer writes in her booklet on the springs, quoting a notice in an early newspaper, the Cañon City Times: “The temperature of the Hot Springs about one mile above town ranges from 100 to 125 degrees. It is pronounced to be the thing and many of our people try it.”

Over the years, various owners and operators of the property remodeled or rebuilt the bath house. Patrons from around the country visited for the waters’ restorative powers, and for a time, Cañon City shuttled in a horse-drawn bus those “invalids who are benefitted by the use of hot baths,” the Times reported.

According to Anne C. Vinnola’s book, Cañon City, in the Images of America collection, Dr. J.L. Prentiss built a 38-room, three story hotel and health spa at the springs in 1873. Visitors from Cripple Creek, Victor, Leadville, and other mining towns arrived by train to rest and benefit from the warm waters.

The Hot Springs Resort, or hotel, was an area landmark for more than seventy years and figures in one of my historical novels, Romancing the Widow, a Will Roger’s Gold Medallion winner for inspirational Western fiction.


The story’s hero, Haskell Tillman Jacobs—recognize a name?—is a Colorado Ranger on the hunt for a horse thief when he literally runs into Martha Mae Stanton, a recently widowed young woman of Cañon City.

Haskell visits the hot springs, and I write of him crossing the footbridge spanning the rushing river. In my mind’s eye, I see him leaving his horse tethered on the north shore and walking gingerly across to enjoy the baths during the resort’s heydays.

Incorporating actual historic settings and using familial names in my stories are two of the things I enjoy most about writing historical fiction.

Sadly, the famous Hot Springs Hotel can no longer be visited, for the springs today are covered by a private residence. The land surrounding the springs remains somewhat unchanged, aside from nurseries and gardens, but the site can be seen from north of the Arkansas River while hiking the popular Tunnel Drive trail.

The wooden footbridge is gone, and so too, are the seekers who traveled to Cañon City to heal their aches and pains and “take the waters.”

But in the heart of one resort patron’s granddaughter and in the pages of her historical fiction, the Hot Springs Hotel lives on. 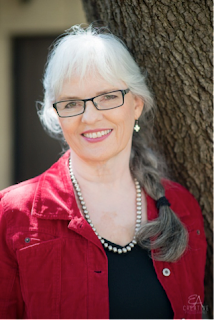 Best-selling author Davalynn Spencer writes inspirational Western romance complete with rugged cowboys, their challenges, and their loves. She is the 2015 recipient of the Will Rogers Gold Medallion for Western Inspirational Fiction and has also finaled for the Inspirational Reader’s Choice Award, the Holt Medallion, and the Selah Awards. As a former rodeo journalist and newspaper reporter, she has won several journalistic awards and has more than 100 freelance articles, interviews, and devotionals published in national periodicals. She teaches Creative Writing at Pueblo Community College and pens a popular slice-of-life column for a mid-size daily newspaper. Davalynn makes her home on Colorado’s Front Range with a Queensland heeler named Blue and two mouse detectors, Annie and Oakley. Connect with her online at: www.davalynnspencer.com

Meet 12 adventurous Victorian era women—a beekeeper who is afraid of bees, a music teacher whose dog has dug up a treasure, a baker who enters a faux courtship, and six more—along with the men they encounter while making summertime memories. Will these loves sown during summer be strengthened by faith and able to endure a lifetime?