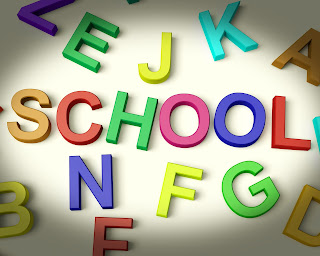 Many famous scientists and inventors were also homeschooled, such as Alexander Graham Bell and Thomas Edison. In our day, homeschooling has become somewhat accepted again, but when I began homeschooling my children in the early 1990s, there were still many raised brows. Chief among the skeptics was always this concern: What about socialization? (This is a running joke among homeschoolers today, who are well aware that their children do not suffer from a lack of socialization.)

It seems people get vastly concerned, though, when children won't be molded, pressured or bullied by their peers five days a week. As if the modern classroom is the only means of socialization. In fact, homeschooled children who interact with a wide variety of age-groups instead of only children their own age, are far better socialized than those in a typical government school. (I don't use the term public school because it doesn't describe the over-reaching control of the federal government on today's schools. They are, in most cases, government controlled via federal dollars. Witness common core. Or the stark absence of God in the classroom.)

Anyway, some years ago I wrote a monthly column for a homeschool group my family belonged to on Long Island, New York. What follows is one of them. It's a  humorous peek into the less orderly aspect of our days, you might say. If you're a homeschooling mom, or know one--you'll enjoy this.

Beware of the Five-Minute Break

Do your children ask during school hours if they can take just a little, teeny five-minute break? Mine do. I'm not sure how they came up with the idea that they are entitled to do this (probably the first time they tried it, and it worked!) but they insist that five-minute breaks should be part of every home-schooling day.
Lunch and recess? No problem.
Five-minute breaks? Beware!

What's terrible about a little, innocent, five-minute break, you ask?

Ha! First they somehow turn into fifteen minutes or more, and then, in addition to growing longer (all by themselves) they're also addictive! Yes, first it was just one five-minute break a day. But soon the requests changed to
"When I finish my math can I take a five-minute break?"
"When I'm done with spelling, can I?"
And then reading, and on and on. It wouldn't surprise me in the least if I opened a teacher's manual and saw the instruction:
STOP NOW FOR A FIVE-MINUTE BREAK.
Why not? They seem to be everywhere.

Okay, five minutes is not a lot of time. I realize that. The problem is that
kids do not.
Really. To them, being granted permission for a break is like getting a key to a magical door to another world: They step into it hoping they will never have to come back.

Take my oldest son, for instance.
Hungry for his next five-minute fix, Brian's eyes, which are large anyway, suddenly take on beagle proportion, and he puts on all the puppy-dog pathos he can muster. ("Please, Mom, p-l-eeease, can I take a 5-minute break?") And despite the five minutes stretching into ten or more, I am then subjected to a barrage of complaints such as, "Oh, already!? I just started playing with Matt! It can't be five minutes already!"
ME: Well, actually, it's been FIFTEEN minutes!
BRIAN: (laughingly) Fifteen minutes? No way! No way! 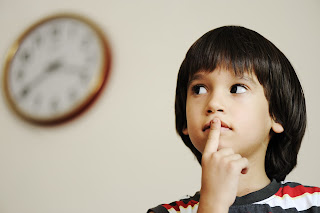 Despite his blossoming skills at telling time, he just cannot fathom the realities of a sixty-second minute. Somewhere in the mysterious regions of his just turned seven-year-old brain, he thinks of five minutes in terms of seconds (300 of them) and then expects to live them out in years; What else can account for his daily baffled expression when I inform him that his time is up?

Once, losing all patience, I made the radical move of threatening to abolish five-minute breaks from our school. My children were in arms instantly:
ME: Where is it written that you must have five-minute breaks?!
THEM: Mom! EVERYONE has five-minute breaks!!
ME: I don't! I never get a break! What about that?
For some reason, this morsel of truth never evokes anything other than sheepish smiles: It's true, but they don't care!

Okay, I do take breaks. I start dinner, wash the dishes and perform other  wonderfully rewarding activities. I nurse the baby when she's ready for it, but I keep within ear shot of the "classroom"--just close enough to keep up my stream of "That's enough, no more talking! Okay, be quiet, you two! Brian, did you finish ALL those spelling words? Kaitlin, I thought you were reading!!"
(And when we're close to the end of the school year, my children suddenly have a great deal more to say to each other across the table during school. It's actually a law of the universe, like gravity: The nearer kids are to being DONE with something, the more they drag it out.)

Are you thinking that our methods are not enough fun, that school shouldn't be such a drag that kids can't wait to get away from it? I agree. I just haven't figured out, yet, how to complete all the requirements of the school year in a way that is always fun. (My consolation is that no one else has it figured out, either! ha!)

Update: In hindsight, I can say with assurance that school isn't always fun--and shouldn't be. Why not? Because sometimes learning is hard work. When it happens to be enjoyable, that's great. Make the most of it. But life often isn't fun or enjoyable--it's just required doing, going, and doing some more.

Homeschooling is really about preparing kids for life. So, if your homeschooling days are similar to what ours used to be, relax. Working through the hard days and teaching kids to work--especially when it's not fun--is a good  and right thing.

Even if it requires frequent five-minute breaks!


For a brief history of modern homeschooling, see this article from the Coalition of Responsible Home Education.
For a list of famous men and women who were homeschooled, see here.

Are you a homeschooler? If so, would you go back to government schools or not? Leave a comment and let us know! 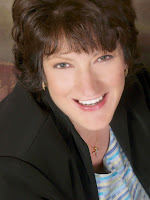 Linore Rose Burkard is best known for historical romance novels with Harvest House Publishers, and now writes YA/Apocalyptic Suspense as L.R.Burkard. Linore teaches workshops for writers, is a mother of five, and still homeschools her youngest daughter—preferably with coffee in one hand and an iPad in the other. Join Linore's mailing list and be automatically entered into a drawing for a free copy of one her books. Winners announced in every issue of her newsletter. 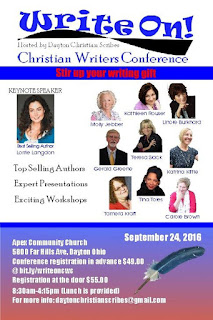 Do you live in or near Ohio? Join Linore and a fabulous lineup of authors and instructors for the WRITE ON! Christian Writers' Conference coming up soon in Dayton, Ohio. To see the details and schedule, click HERE. (New! Student Discount Available. Save $19!)  But hurry! Pre-Registration closes Sept. 23rd. Walk-ins welcome, but you'll pay more.

(If you come to the conference, be sure to say hello! I'd love to meet you.)

Also: Two fellow authors who write for this very blog are also giving workshops at this conference! Kathleen Rouser and Tamera Lynn Kraft. Come out and meet all of us. :)

Posted by Linore Rose Burkard, Novelist at 12:30 AM