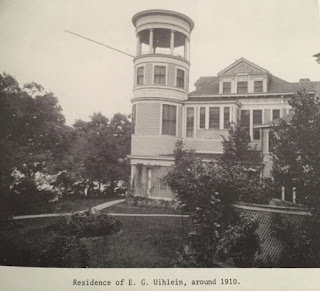 The October stop on our tour of the late 19th/early 20th Century homes on the shores of Geneva Lake in southeastern Wisconsin is Villa Palatina, a bit of a distance along the shore from our last stop. We had to pass by several of the many camps that sprouted up at the same time the shoreline began to be populated by private mansions.

The home was built in 1893 by George Weiss. The land itself before then was called Forest Glen Park which included a public resort with a hotel, cottages and camping facilities. The property included a pretty stream that originated from a spring. The stream flowed down to the shore and fed into the lake. (Geneva Lake is fed by several springs at the west end of the lake). When Weiss purchased a portion of the resort property, he chose the part that included the stream. The camp buildings were sold off and moved elsewhere. Weiss improved the gardens around the stream, but his future plans for the property were cut short when he became ill and had to sell the property to Edward G. Uihlein, whose family owned the Schlitz Brewing Company in Milwaukee. The brewery had established a location in Chicago and E.G. Uihlein was assigned to oversee that operation. Geneva Lake sits almost halfway between Chicago and Milwaukee, making the lake property a good place for the Uihlein extended family to gather.


Uihlein, who changed the name of the estate to Forest Glen, focused a great deal on the land around the stream, developing it even more than Weiss had done. He hired landscape architect, Jens Jensen, to design the property which included rustic dams and bridges. He brought in plants and trees that were not usually seen in the area, along with those which were indigenous to Wisconsin. Once completed, he invited the public to come and enjoy his park-like setting. Many residents from the nearby village of Fontana took advantage of his offer, which continued for several decades.

Uihlein died in 1921 and a year later the home burned to the ground and nothing of value was salvaged. A short time later the property was sold to a developer who subdivided the land and called it The Gardens. Today when you
drive along Lake Shore Drive between Fontana and Williams Bay, you pass through the area known as the upper and lower gardens. If you Google Lower Gardens, Fontana WI, you can see the modest homes (by comparison to many of the much larger homes on the lakeshore) that are currently for sale.

On a personal note, I’ve been aware of the Uihlein family for years because of their presence in Milwaukee.  Some of the magnificent homes that other Uihlein family members built at the same time as the Geneva Lake mansion, have been destroyed, but one still stands in Whitefish Bay, WI, a Milwaukee suburb. It also faces a lake—Lake Michigan.

Next month we'll move over to the south shore of the lake and visit the Oaks.

A native of Lake Geneva, Wisconsin, author Pamela S. Meyers lives in suburban Chicago with her two rescue cats. Her novels include Thyme for Love and her 1933 historical romance, Love Finds You in Lake Geneva, Wisconsin. Love is All We Need (the sequel to Thyme for Love) will release soon, and Second Chance Love from Bling!, an imprint of Lighthouse Publishing of the Carolinas, will release in January 2017. When she isn’t at her laptop writing her latest novel, she can often be found nosing around Wisconsin and other Midwestern spots for new story ideas.