Christmas at the Needles

Over the past five years, I've gained somewhat of a reputation as the "lighthouse lady," the one who blogs about lighthouses and puts them in her novels. I'm by no means an expert, but I do love lighthouses and love to research them. What I really love, though, is learning about the lighthouse keepers that took care of them 24/7, year after year. Very few lighthouses are still kept by humans since automation has taken over the lights, however, there are still a few people that used to be lighthouse keepers, and I've been especially privileged to get to know them.

One such lighthouse friend is Gordon Partridge, who was a  lighthouse keeper in the UK for twenty-two years (1974-1996). Gordon recently shared with me what Christmas was like when he was keeper at the Needles Lighthouse off the Isle of Wight. It is so special that I wanted to share it with you.

I was privileged to serve on Needles Lighthouse,one of England's best known and an icon of the Isle of Wight. My appointment lasted for just over six years during which time I was on duty for four Christmases, the memories of which have happily endured in my mind ever since. 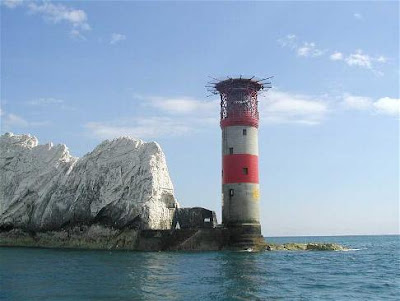 The Lighthouse was "adopted" by the nearby Royal Lymington Yacht Club who generously,through their Clubhouse collection tub,raised much funding for "Lighthouse Comforts," amongst which were a stereo music centre,subscriptions to various publications,I.e. The quarterly, This England mag and others. Also on their list was to provide festive cheer for those on watch over Christmas, their kindness and generosity was overwhelming.

Usually, on the weekend before the actual Christmas, a fleet of RLYC craft, of all shapes and sizes, would sail down the Solent to the Lighthouse. Some 80 to 100 vessels would standoff and sing carols to us, weather permitting, the local Vicar would land and administer prayer to us. A senior member of the Club Committee would accompany him and deliver a sackful of cards and various cases of Christmas cheer, festive food, and often a bottle or two of the "hard stuff!"

I will never forget the atmosphere of song resonating across the water from the the assembled floating throng, who, for an hour or more, would offer a concert of favourite Christmas Carols and music which warmed our hearts with genuine Christmas love and peaceful wishes.

My heart is warmed whenever I think back, and I thank those people for their thoughtfulness and love from across the water.

We too should offer our greetings and welcome hands of friendship from across our waters.

That being so, I wish you and yours, a very Happy and Healthy Christmas. God Bless. 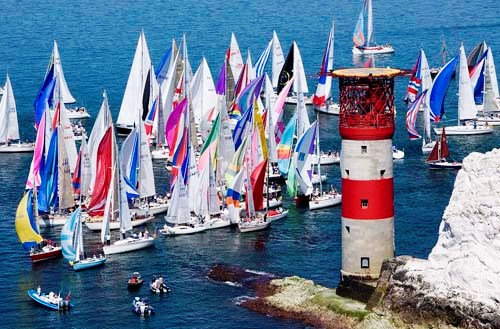 Award-winning author Marilyn Turk lives in and writes about the coast – past and present. A multi-published author, she writes a lighthouse blog at http://marilynturk.com. Her latest release, Rebel Light, Book 1 in the Coastal Lights Legacy series, is now available, along with A Gilded Curse, and Lighthouse Devotions. Find them on amazon.com or through Lighthouse Digest magazine.