When Theodore Roosevelt Was Shot--and a Giveaway

Perhaps we don’t hear about the assassination attempt on Theodore Roosevelt as much as we do some others, because he wasn’t actually president when it occurred.

Theodore Roosevelt was known as a robust and active man. He refused to let his health hold him back. As a child, he was somewhat weak, and his father told him to “make his body.” For the rest of his life he insisted in engaging in strenuous exercise. People who worked with him had trouble keeping up with him.

On October 14, 1912 he made his way to the Milwaukee Auditorium to give a speech. He got into an open-air car outside the Gilpatrick Hotel and was waving his hat to the crowd when a man fired at him from only a few feet away with a Colt revolver.

Roosevelt was campaigning for a third term as President. He had served from 1901 to 1909, and sat out the next four years. In the 1912 campaign, he lost the Republican nomination to incumbent president William Howard Taft, and so decided to run as a Progressive Party candidate. Heading out to make his speech, he had folded the fifty or so pages of his planned address in half and stuck into the inner pocket of his heavy coat. That speech, along with a case holding his eyeglasses, may have saved his life.

The shooter, John Schrank, 36, was an unemployed saloonkeeper. He said later that “any man looking for a third term ought to be shot.”

But he also seemed to think he’d seen the ghost of William McKinley, whose assassination in 1901 catapulted Roosevelt to the presidency. Schrank felt he was following McKinley’s wishes in stalking Roosevelt for weeks and trying to kill him. According to Schrank, McKinley told him in a dream that Roosevelt was his murderer and to avenge his death. The man spent the rest of his life in a Wisconsin asylum.

Roosevelt could tell the wound was minor and insisted on going ahead with his speech, in spite of what the doctor traveling with him advised. He declared, “He pinked me,” a fencing term which meant the wound was not serious but drew blood. Roosevelt avidly studied and practiced fencing and single stick fighting.

He went to the auditorium to deliver his address. He declared to the crowd, "I have just been shot…Fortunately, I had my manuscript. . .and there is where the bullet went through.” He displayed the two holes through each page of his folded speech. 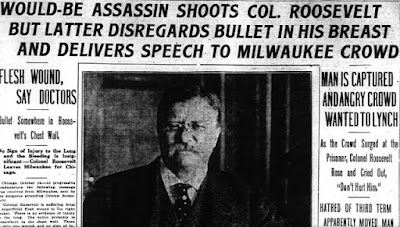 His party had been nicknamed the Bull Moose Party, for Roosevelt’s energy and determination. He told the crowd as he displayed the blood-stained manuscript, “You see, it takes more than one bullet to kill a Bull Moose.” He spoke for more than an hour. Only at its conclusion did he let his attendants get him to a hospital.

X-rays showed that the bullet lodged against his fourth right rib. If the items in his pockets hadn’t deflected it, probably it would have struck his heart. The doctors decided it was safest to leave the bullet where it was, rather than to operate, and he carried it for the rest of his life.

Even though the assassination attempt brought Roosevelt a lot of sympathy, he lost the election, and Democrat Woodrow Wilson took office.

Giveaway: Leave a comment with your contact information to enter a drawing for a copy of my book River Rest, set in 1918 Maine.

Susan Page Davis is the author of more than sixty published novels. She’s always interested in the unusual happenings of the past. Her newest books include Echo Canyon, Seven Brides for Seven Texans, The Saboteur, River Rest, and Tearoom for Two. She’s a two-time winner of the Inspirational Readers’ Choice Award and the Will Rogers Medallion, and also a winner of the Carol Award and a finalist in the WILLA Literary Awards and the More Than Magic Contest. Visit her website at: www.susanpagedavis.com .
Posted by Susan Page Davis at 1:00 AM