Echo Canyon in Utah and a Giveaway

Susan Page Davis here. The beautiful trail through Echo Canyon was well used in the 1800s. The pioneers’ wagon trains found it the best way to get from Wyoming into Utah, and from there to California. From the Green River area, where Fort Bridger was located, in southwestern Wyoming, they would head down the canyon. 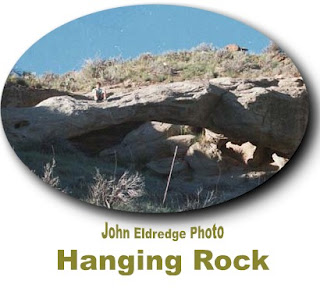 Before the wagons came, the trail was used by Buffalo and other animals, native Americans, and explorers.The Mormon trail followed it down to the desert and beyond. Later, stagecoaches, the Pony Express, gold and silver miners, and railroad and telegraph lines used it because it was already there and one of the easier paths through the mountains. It was simpler than blasting a new road for the railroads, and today Interstate 80 takes this route. Historian John Eldredge has graciously allowed me to share with you some of his photos of attractions in the canyon.

The trail in the mid-1800s was a narrow pathway down a canyon leading from the grasslands near Fort Bridger, in Wyoming, to the drier lands of Utah. Some of the most vivid descriptions of it come from the journals of Mormon pioneers who traveled it by wagon, on foot, or pulling a handcart. Remains of the fortifications built by the Mormons in 1857-58, during the Mormon War, can still be seen. 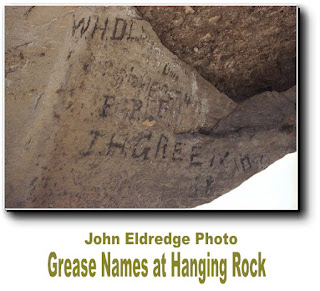 William Clayton wrote, “There was a very singular echo in this ravine, the rattling of wagons resembled carpenters hammering at board inside the highest rocks. The report of a rifle resembled the sharp crack of thunder and echoes from rock to rock for some time. The lowing of cattle and braying of mules seemed to be answered beyond the mountains. Music, especially brass instruments, had a very pleasing effect and resembled a person standing inside the rock imitating every note. The echo, the high rocks on the north, high mountains on the south, with the narrow ravine for a road, formed a scenery at once romantic and more interesting than I have ever witnessed.”

How eerie and exciting this passage must have been to the early pioneers! I’ve driven this route on the highway, but I know we don’t get the full effect as we breeze past. You can't see all of the features, or the mysterious rock art, or even the best view of some of the formations. A lot of the pioneers hiked off the trail to see them. Many left their names on rocks or in caves.

Some of the notable sights along this trail include Cache Cave, which is at the head of Echo Canyon and can’t be seen from the highway. It has also been called Swallow Cave and Rock Cave. Again, from William Clayton’s 1847 journal: 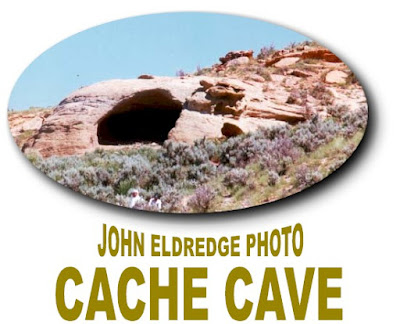 “About a quarter of a mile west from the camp is a cave in the rock about thirty feet long, fifteen feet wide and four to six feet high. There are many martins at the entrance and on observing closely, can be seen myriads of small bugs. It is supposed from appearances that there is some property cached in the cave.”

Chicken-cock Bluff was so named because of a rock with a strong resemblance to a rooster. 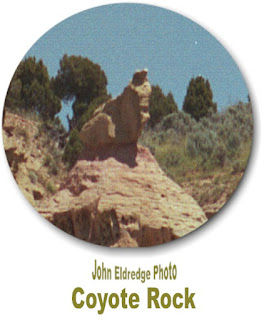 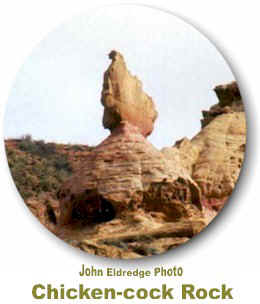 Coyote Rock is another name for the same formation. It looks like a completely different animal when viewed from the right perspective. In this view, Chicken-Cock Rock looks like a coyote sitting on a rock.


Pioneer Richard Burton noticed this oddity about rock formations and wrote in 1860, “And the wondrous variety was yet more varied by the kaleidoscopic transformation caused by chance of position: at every different point the same object bore a different aspect. 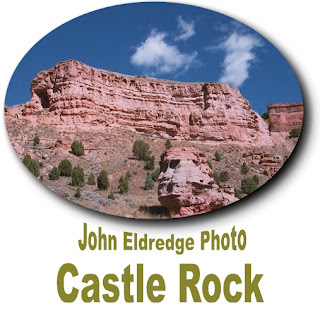 Another is called Castle Rock, a large bluff made of red sandstone. Pioneer Howard Stansbury wrote in 1850 that it “almost perfectly resembled a rustic cottage, with a deep-arched doorway and gently sloping roof, covered with scattering cedars. The illusion was very strong, and became more and more perfect as we approached, until we almost expected to see someone issuing from the portal to gaze upon the passing [wagon] train.” It had become known as Castle Rock by 1868, when the railroad was being built. 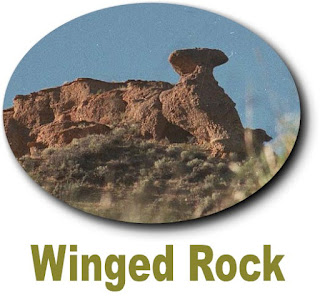 Sentinel Rock is another popular formation, as are Winged Rock, Jack-in-the-Pulpit Rock, and The Witches. Many other majestic formations can be seen along this route.

The Pony Express lasted only 18 months, in 1860 and 1861. This colorful business was abandoned when the transcontinental telegraph lines were completed in the fall of 1861. In 1869, the Union Pacific laid railroad tracks through and connected with the Central Pacific at Promontory Point, Utah. Now people could ride the trains all the way to Oakland, California. 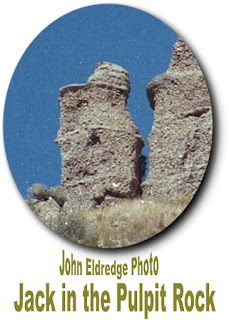 To enter the giveaway of my novel, Echo Canyon, set in this location in 1860, leave a comment with your contact information. Iris Perkins is told she will be married soon to a man she despises. A chance visit by two brothers and a beautiful woman from the other side of Echo Canyon gives her hope.