The Legends and Symbolism of the Lily

“And why worry about your clothing? Look at the lilies of the field and how they grow. They don’t work or make their clothing,  yet Solomon in all his glory was not dressed as beautifully as they are. (Matthew 6:28-29, NLT)
While there are many varieties and colors of lilies today, from the brilliant pastels of tiger lilies to the warm, bright orange of the common daylily, in this article I’m considering the symbolism of the white lilies we often attach to Easter.

I was surprised to find in my research that they were symbolic in Greek mythology. They represented the Greek goddess Hera, from whose drops of left over breast milk they were said to have sprung. Even the Roman goddess, Venus, had her part to play. Jealous of their beauty and purity, legend has it that she added an ugly pistil to the their center to mar their loveliness.


Lilies were mentioned in Old Testament scripture. In ancient Judaism they were symbolic of righteousness, resurrection, and even of Israel. While lilies may wither in the sunlight, but for being watered, God was like the dew which nourished and protected Israel.

In early Christianity it was said that lilies arose from Eve’s repentant tears when having to leave Eden after the fall into sin. They became associated with innocence and purity and thus, the Virgin Mary.

Jesus, Himself, referred to the “lilies of the field” during the Sermon on the Mount, reminding us that God is a better clothing designer than His people are. His proof is in the beauty, delicacy, and color of even lowly flowers of the field which He created. He is the ultimate provider of clothing. Perhaps the most likely connection of the lily to Easter is that it is said lilies were discovered in the Garden of Gethsemane after Jesus’ death and resurrection. They have been nick-named “the white-robed apostles of hope.”

Since throughout the centuries they have been associated with innocence and purity, it makes sense that they would become prevalent as we remember our pure and sinless Savior, Jesus Christ, who died to cleanse us from sin and rose from the grave to give us new life in Him.

Fast-forward to 1919, when Edward Houghton, a United States veteran first brought home the Easter Lily which was originally called the Bermuda lily. It flourished in his home state of Oregon. By 1945 more than 1000 lily farmers could harvest and sell bulbs across the country. They have since become readily available for Easter services and celebrations everywhere flowers are sold. The rest, as they say, is history!

Giveaway information: It's the one-year anniversary of the publication of
my first full-length novel, Rumors and Promises. Please leave a comment
for a chance to enter, by April 25th. Paperback for U.S. and Canada only.
E-book version for other international entries. 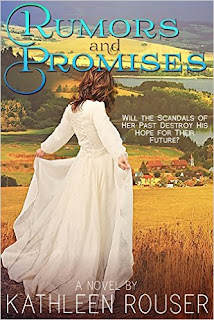 While Sophie seeks acceptance for the child and a measure of respect for herself, the rumors swirl about her sordid past. Should Ian show concern for Sophie plight, he could risk everything - including his position as pastor of Stone Creek. 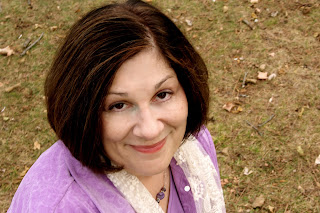 Kathleen Rouser has loved making up stories since she was a little girl and wanted to be a writer before she could read. She desires to create characters, who resonate with readers and realize the need for a transforming Savior in their everyday lives. Her first full-length novel, Rumors and Promises, was published by Heritage Beacon Fiction, an imprint of LPC Books, in April, 2016.

Previously a homeschool mother of three, she more recently has been a college student and sometimes a mild-mannered dental assistant by day. Along with her sassy tail-less cat, she lives  Michigan with her hero and husband of 35 years, who not only listens to her stories, but also cooks for her.