How a Wisconsin Lakeshore Home Came to be Called Aloha Lodge

For this month we are moving farther down the south shore of Geneva Lake in southeastern Wisconsin to an estate called Aloha Lodge, which was designed by Howard Shaw, a well known architect of the period. Although the home was built over the years beginning in 1900 and ending in 1902, it is still very much intact today despite a string of different owners over the many decades.


Aloha Lodge was Built by Tracy C. Drake, founder and owner of the famous Drake Hotel in Chicago and, sometime later, The Blackstone Hotel and Blackstone Theater in Chicago. The home became a summer and weekend retreat for the Drake family for thirty-five years. At that time it was sold to Richard Lydy, a Chicago parking garage magnate.

During the years the home was under construction, Mr. and Mrs. Drake took an extended vacation to Hawaii and fell in love with the islands. Upon returning home they decided to name their estate Aloha Lodge and their private yacht was named Kaiulani. When that steam yacht burned beyond repair and they purchased a new yacht, they named that yacht Aloha.

In the latter months of the construction, Mr. Drake had been so enamoured with a grove of sugar maples he'd seen in the fall when their leaves turned a brilliant red, he approached the owner of the grove and purchased 100 of the trees. The trees were removed during the winter. With their root balls carefully wrapped, they were transported across the frozen lake from the village of Williams Bay to Aloha Lodge and planted in the home's front yard. The twist of the story is that apparently when fall arrived, the leaves never turned red again, but a bright golden color instead. I don't know if any of those trees are still standing, but the trees in the current photo don't look old enough to be over 100 years old.

According to an article in the July 23, 1939, edition of the Chicago Tribune, the interior of the home was anything but what one would expect in a colonial style home. It would appear that if the couple were alive today they would definitely embrace the “open concept” style of interior design. There are no entry halls to take up wasted space and the entire front of the home, which faces the lake, is taken up by what we would call today a “great room.” At one end is a large fireplace and an arrangement of living room type furniture, while at the opposite end are shelves which give that space a library-like feel. At the other corner of that end of the space is the grand piano, radio, phonograph, and a Swiss music box. which gives the sense of a music room. The stairway to the second floor is within the boundaries of the room as well. The side of the room that faces the lake looks out on a wide veranda and beyond that, about 50 feet away, the crystal blue waters of Geneva Lake.

Over the years, additions have been built onto the home on either end that have extended its footprint, but the main part of the home has remained intact, and it can be seen from the excursion boats where it is announced by the tour guide. And, of course, if you walk the shore path along that part of the lakeshore, you can stroll directly through the home’s front yard! The picture below is how it looks now.

What about you? Do you prefer open concept or walls defining singular rooms?

A native of Lake Geneva, Wisconsin, author Pamela S. Meyers lives in suburban Chicago with her two rescue cats. Her novels include Thyme for Love, Love Finds You in Lake Geneva, Wisconsin, Second Chance Love, Surprised by Love (a reissue of Love Finds You in Lake Geneva to be released June 2017) and her novellas, What Lies Ahead, and If These Walls Could Talk (to be released May 2017). When she isn’t at her laptop writing her latest novel, Pam can often be found nosing around Wisconsin and other Midwestern spots for new story ideas. 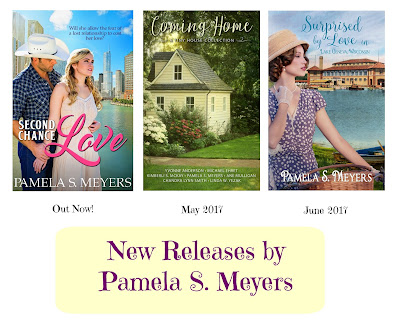