It's finally springtime in Minnesota, though you wouldn't know it as I type this. We've had snow flurries in the past 48 hrs and days of dreary clouds. Hopefully, warmer weather, flowers, and soft breezes lie in the not too distant future.

One thing that the state is gearing up for in addition to warmer weather is the grand re-opening of the Minnesota State Capitol Building in St. Paul.

The state recently completed a $310 million project to preserve and conserve our amazing State Capitol building. For months...years?...the dome and facade have been wrapped in construction plastic and scaffolding, and lawmakers have had to navigate a maze of plywood barriers to get to their offices.

But all that work is nearing an end, and the capitol will be a shining star on the St. Paul landscape once more.
Minnesota's capitol, built in 1905, was designed by world famous architect Cass Gilbert. Though Cass was born in Ohio, he moved with his family to Minnesota when he was a child of 9, and called Minnesota home. Cass Gilbert designed many famous buildings, including the state capitols of West Virginia and Arkansas, and the United States Supreme Court building. He also designed the Woolworth Building and the towers for the George Washington Bridge in New York City, many college campus buildings across the country, and several churches.

When designing the Minnesota State Capitol, Gilbert was inspired by the Basilica of St. Peter in Rome. The dome he created for the capitol is the second largest in the world behind only that of the Basilica itself. It is the largest free-standing dome in the western hemisphere.

The dome is 223 feet high, which means you could stand my house on end three times and still not quite reach the top of the dome!

Built of marble from Georgia, and granite, pipestone and other materials from the State of Minnesota, the capitol is a glorious piece of art in its own right.


One other unique feature of the Minnesota State Capitol is the Quadriga. 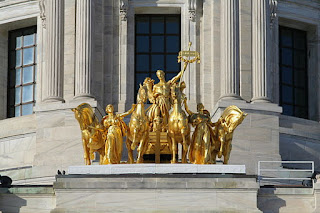 The group of sculptures is known as Progress of the State and features a chariot, a charioteer driving four horses, and two female figures. The statue is made of steel, covered in copper, and encased in gold leaf. It sits high above the south entrance on a portico, and when the sun shines on it, it is almost blinding.

One of the most beautiful rooms in the capitol is the Governor's Reception Room. Gilded dark wood and some of the most important artwork in Minnesota's long and storied history reside here. It's a statement room, for sure!

If you visit St. Paul, you are most welcome (and encouraged) to tour the Minnesota State Capitol. The Minnesota State Historical Society offers a FREE Guided tour that includes (weather permitting) a visit to the quadriga on the south portico. Be sure to look for all the gophers (the MN state symbol) in the art and architecture. When we toured the capitol with our children, our guide told us he had found nearly all of them, but he was still missing the location of a few that Gilbert had worked into the design.

You can visit her online at www.ericavetsch.com and on Facebook at Erica Vetsch Author
Her latest release is The Bounty Hunter's Baby, and you can find out more about it HERE: 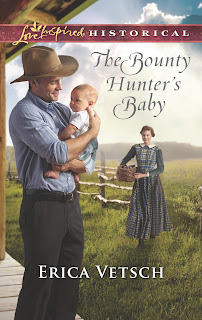