Have you spent time in Washington D.C.? I went to our nation’s capital with my parents at age nine, but two springs ago I got to visit again, this time with my sister. It was partly a writing research trip for me, and we stayed with my dear friend and critique partner, Sandra Barnes, and her family.


While we still saw the White House, Washington Monument, and Smithsonian, Sandra also helped us find some places not as many tourists know about—partly because of my research about D.C.’s Civil War, African-American, and abolitionist history. And it was in some of these spots where our nation’s past came to life for me the most. So I thought it would be fun to share a few with you!

One of the first places we visited was the Sotterly Plantation in Maryland, about an hour outside Washington D.C. I’d been to a plantation once before, but the truth of what life there meant sank deeper into my heart seeing one with Sandra, who is African American—as we stood first in the sunny, attractive dining room of the family, and then in the dirt-floored, rough-roofed cabin of the slaves. When I gazed below the sloping grain fields sweeping down from the house to the river where slaves used to try and escape, I could almost picture the real people, black and white, who had lived here only a few generations ago.


Next we toured the home of renowned abolitionist,speaker, American ambassador—and former slave—Frederick Douglass, located in the southeast corner of Washington D.C. itself and open only by guided tour. History sprang to life as we viewed grocery budgets and books belonging to Douglass and his wife, as well as his personal office and library, today set to replicate almost exactly an existing photograph of Douglass sitting at his desk. Many of the books and furniture are original. Perhaps most fun was discovering the “Growlery” out back, a little, windowless outdoor building where Douglass would go alone to write, and “growl,” if he needed to! I know some writers who might like to have a Growlery today. :) 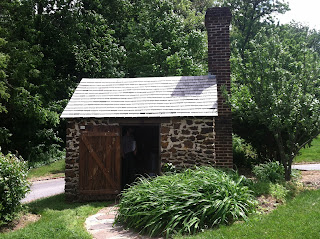 Frederick Douglass's "Growlery" out back


In the heart of D.C., we arrived at Ford’s Theatre, where President Abraham Lincoln was assassinated. We walked through historical displays on that fateful night and then sat in the theater itself to see a musical production on the Civil War. The very box where the president and first lady sat for the show that evening—and where John Wilkes Booth shot Lincoln in the head—rose to our right, draped in sober red, white, and blue. 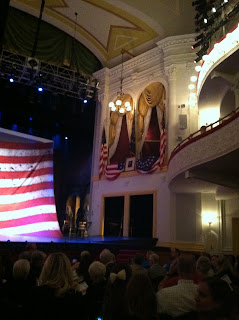 But I think when history hit me most vividly was at the historic 15th Street Presbyterian Church, an African-American congregation founded in 1841 and involved in the Abolitionist movement I was researching. We met with Dr. Tressie Muldrow, the church historian. She gave us much valuable history on the church, but my sister and I sat most riveted when she began telling us some of her own story, of being one of the college students to participate in the Woolworth’s lunch counter sit-ins in Greensboro, North Carolina, in 1960. 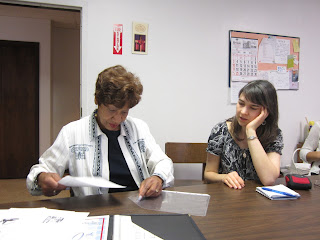 
Dr. Muldrow and the other students, black and white, had sat respectfully but firmly in their chairs at the counter, enduring mayonnaise and mustard smeared in their hair and other abuse from white customers simply for sitting outside the “colored” section. She told us how they, the demonstrators, met together every evening for training and debriefing, and of the satisfaction she feels today when she visits the site of that restaurant and sees it gone, a civil rights museum in its place.


When we visited the Smithsonian's Museum of American History a bit later, we saw those very stools they had sat on at the Woolworth’s counter. It still gives me chills a bit to think of it. 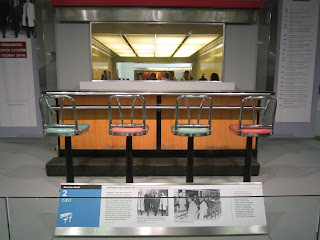 Woolworth's counter stools at the Smithsonian


We made many other memories, though I don’t have space to detail them all: a chance visit at the Charles Sumner School, one of the first schools for African-American students in D.C.; seeing the “I Have a Dream” paving stone at the Lincoln Memorial where Martin Luther King Jr. gave his famous speech, as well as the MLK memorial itself; the Korean War Memorial, simple but moving, with its realistic statues of soldiers pushing their way through a living “jungle” of bushes; and Arlington Cemetery. Perhaps I can share more another time!

So, have you ever been to Washington D.C.? What unusual historical sites did you find? Please comment and share! 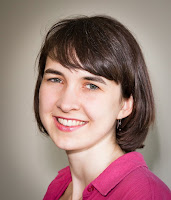