Lory Gruenberger Cahn: Almost Saved by the Kindertransport & A GIVEAWAY

For the past two months, I’ve posted individual stories about children who fled the Nazis and survived the Holocaust by taking the Kindertransport to England. An earlier post explains how the Kindertransport program was created. If you missed that post and would like to read it, here’s the link:  The Kindertransports: Nearly 10,000  Children Rescued from Nazi Territory.

Lory Gruenberger lived a happy childhood with her brother and parents in Breslau, Germany, close to the Polish border. To her doting father, Lory could do no wrong. Mr. Gruenberger, a partially paralyzed WWI veteran, had a flourishing law practice and refused his government disability pension. After the Nazis took power in 1933, they didn’t harass Mr. Gruenberger due to his veteran status.

By 1937, Lory’s parents recognized the rising danger for Jews and searched for a way to leave Germany. They applied for quota numbers to the U.S., but the wait was long. In the meantime, Lory’s aunts in South America sent papers for the family to emigrate there. The Gruenbergers sold their house, bought passage for South America, and shipped all their belongings ahead. Two days before their scheduled departure, the Argentine consulate informed them that Hitler would no longer allow siblings to sponsor each other to emigrate from Germany. They were unable to find a way to leave.

The Gruenbergers had money, but very few stores would sell to Jews. They lived in a hotel in Breslau and started over, purchasing what they could. Lory’s brother completed secondary school three years early, and the family sent him to a small university in Czechoslovakia to get him out of Germany. During the summer break, they sent her brother to stay with Lory’s uncle who taught at Cambridge and Oxford in England. He never returned to Germany.

One morning in November, 1938, Lory road the trolley car to school as usual. During the trip, she passed store after store with smashed windows. In the center of town merchandise littered the sidewalks. She realized all the damaged businesses belonged to Jews. After leaving the trolley car, she could only see the top of their synagogue, but she spotted flames shooting from the edifice. She was so frightened, she crossed the street and took the next trolley back home, refusing to look out the windows on the return trip.

Lory arrived home, and the family maid, with tears running down her face, grabbed onto Lory. German officials had just arrested Lory’s father and taken him away ten minutes earlier. Lory’s mother was also distraught. But three or four hours later Mr. Gruenberger returned home in a police car. The Iron Cross belonging to a WWI veteran still provided protection for some Jews.

Lory applied and was accepted for the Kindertransport. Her father wanted her to go to England, but at the same time he didn't want her to leave. On the prearranged day, the Gruenbergers boarded the Kindertransport train with Lory and put her suitcase up. Her father lowered her window all the way down so she could lean out of the train – the German passenger trains had very large windows. They hugged and kissed, and Lory’s parents disembarked. While waiting on the platform, her father’s face turned whiter and whiter, and her mother couldn’t hide her suffering.

As the train started to move, Lory’s father asked to hold her hands through the window. Before the train gained speed, Mr. Gruenberger pulled Lory out the window. She fell on the train platform, causing injury and bleeding. Her father was extremely happy to have his little girl back, but Lory was devastated. After arriving home, her father admitted he probably shouldn’t have pulled her off the train, but after losing his son, he didn’t want to live without her.

Mr. Gruenberger chose to believe that nothing would happen to their family and stated as much to Lory and her mother. Lory was no longer allowed to attend school or the movies, but Lory and another Jewish friend decided to defy part of this order. Neither girl looked Jewish, so they removed their yellow stars and went to see Shirley Temple movies. When Lory’s father discovered from the other girl's parents where she was, he went to the theater with a light and pulled her out. He slapped her, which he had never done before.

Most stores posted signs informing Jews they weren’t allowed to shop in their establishments. When Lory and her mother entered stores where they were welcome, they were greeted with “Heil Hitler.” They responded with “Drei Liter,” which means three liters, and because it sounded so close, no one challenged them.

In 1940, the authorities called women up for forced labor. Lory was fifteen years old and was assigned to clean the streets in another part of Breslau. She wasn’t allowed to ride on the trolley car because she was Jewish, so she had to get up at 4:00 AM and walk by herself in the dark almost 45 minutes to the assembly place. Lory was next assigned to work in a uniform factory where she mended and cleaned dirty uniforms. She did this until close to the end of 1941.

Various judges and lawyers visited Lory’s father and warned him that he and his family would eventually be arrested. The SS came at 4:30 one morning and nearly broke the door down. The Gruenbergers were only allowed to take what they could put on and nothing else. Lory’s father had a very high fever, and he was taken out on a stretcher and loaded on a truck. Lory and her mother were taken on another truck to the huge yard of a synagogue and, along with hundreds of others, waited outside in the March cold for about two days and nights. They were then taken by truck to the railroad station and loaded into cattle cars. Thirty-five to forty frightened people traveled in the cattle car, in complete darkness, with no food, for two days.

TO BE CONTINUED (August 1st) 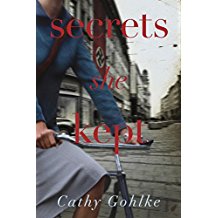 Giveaway: Leave a comment below by Tuesday, 7/4, at 8:00 PM (EST) and earn a chance to win the Carol Award, Christy Award, & INSPY Award winning book, Secrets She Kept, by Cathy Gohlke. Share on Facebook or another favorite social media site and earn an extra chance to win. Please remember to leave your e-mail address and let me know if you've shared.
Posted by Cindy Kay Stewart at 12:30 AM