The History of Word Puzzles

For over sixteen years, I’ve been a fiction author, but recently, I decided to try my hand at something else—a U.S.A. word find puzzle book. Creating this book made me wonder about the history of word games, so I decided to do some research and create this month’s post about them. Although there are many types of word puzzles—arrowords, acrostics, jotto, rebus, and more—I’ll be giving you a brief history of three of the more popular word games. 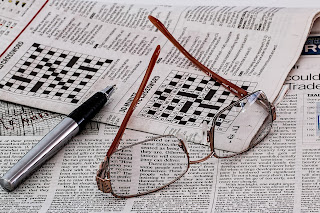 Crosswords are considered the most popular type of word puzzles. Journalist Arthur Wynne from Liverpool, England, is the first person known to have published a crossword puzzle. His puzzle appeared in the New York World on December 21, 1913. Wynne's puzzle was diamond shaped and contained no internal black squares, differing from today's crosswords. During the 1920’s, other newspapers quickly picked up the newly discovered pastime, and within a decade, crossword puzzles were featured in almost all American newspapers. During this time, crosswords began to assume the shape we’re more familiar with.

Considering crosswords puzzles were invented over a hundred years ago, you would think word search/find/seek puzzles—whatever you call them—have been around almost as long, but no. Not true. Norman E. Gibat created the first word find puzzle in 1960. He published it in a small want-ad's type newspaper called the Selenby Digest in Norman, Oklahoma. Selenby's original size was 8.5 by 5.5 inches, and it was distributed free at Safeway and other stores in Norman. Teachers in the area soon realized what a great educational tool the puzzles were and began to use them in their classrooms. Before long, word searches were being syndicated nationally.

Here's a Famous Inventors Word Search I made for you. :) You don't have to read it in such a small font. It's a jpg image so you should be able to right click on it and save it. Then open it and print it. 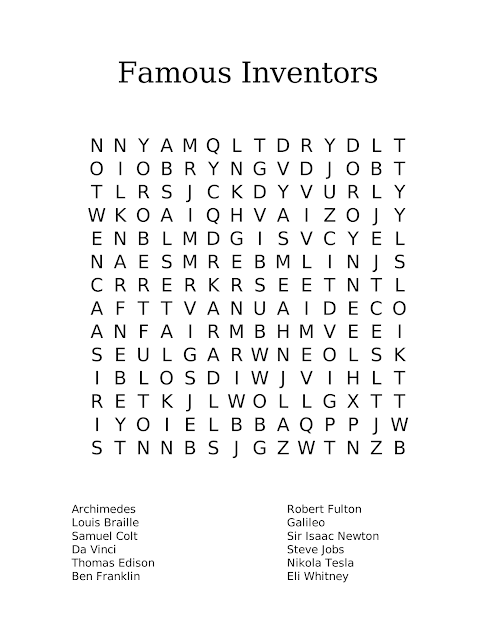 Note: Leave a comment below with your email if you'd like the solution or are unable to save the puzzle.

Cryptograms—a type of puzzle that consists of a short piece of encrypted text—is one of the oldest word games in existence. Monks from the Middle Ages are credited with being the first to use cryptograms for entertainment. Before that, they were used personally and for military for security purposes. Around the thirteenth century, Roger Bacon, an English monk, penned a book in which he listed seven different cipher methods. In the 19th century Edgar Allan Poe helped to make cryptograms popular in many newspapers and magazines.

I created a cryptogram for you from a humorous quote about history by David Ben-Gurion, first Prime Minister of Israel.

My favorite type of word puzzle is the word search. How about you? Do you like working word puzzles? Do you have a favorite kind? 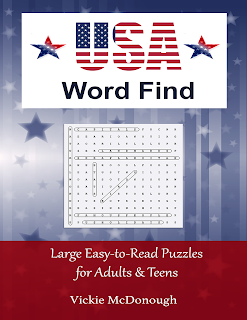 This book will be available on Amazon in August. 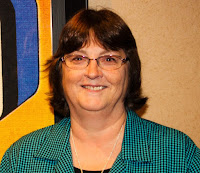 Bestselling author Vickie McDonough grew up wanting to marry a rancher, but instead, she married a computer geek who is scared of horses. She now lives out her dreams penning romance stories about ranchers, cowboys, lawmen, and others living in the Old West. Vickie is a best-selling author of more than 40 published books and novellas, with over 1.5 million copies sold. Her novels include End of the Trail, winner of the OWFI 2013 Best Fiction Novel Award. Whispers on the Prairie was a Romantic Times Recommended Inspirational Book for July 2013. Song of the Prairie won the 2015 Inspirational Readers Choice Award. Gabriel’s Atonement, book 1 in the Land Rush Dreams series placed second in the 2016 Will Rogers Medallion Award. Vickie has recently stepped into independent publishing. To learn more about Vickie’s books or to sign up for her newsletter, visit her website: www.vickiemcdonough.com