Where Present Meets Past: History on the Navajo Nation 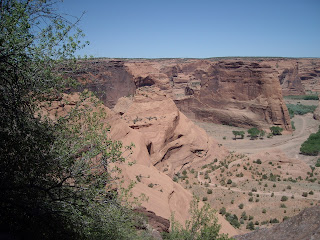 This month my husband and I visited some dear friends in northwestern New Mexico, on the border of the Navajo Reservation. I’d been several times before in researching my novels, but our Navajo-and-Dutch friends graciously drove us all over the area again, and it was a joy to share and explore the rich history in this region of New Mexico and Arizona with my husband as well. Here are a few of the historical sites we saw—I hope you enjoy learning a bit about them too! 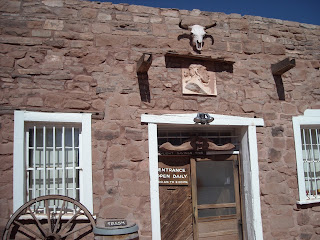 Founded in 1878 by J.L. Hubbell, the Hubbell Trading Post in Ganado, Arizona, is the oldest continuously operating trading post on the Navajo Nation and has been a National Historic Site since 1965. Stepping inside is like stepping into the past—the creaking wooden floor weathered with decades of footsteps, the sacks of Bluebird flour, essential for making traditional Navajo frybread, against the long wooden counters lined with canned salsa and jam, the back room filled with exquisitely woven Navajo rugs, jewelry, and baskets. 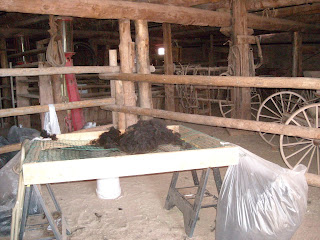 Outside the adobe building stands the old wool shed, where sheep’s wool brought by Navajo families to trade would be weighed and priced, a freight wagon used for carting merchandise across the desert, and a corral with a couple of friendly horses. All in all, it’s both a trip into the past and a peek into Navajo culture today. 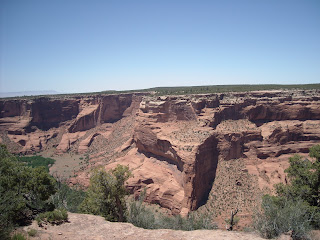 Sacred to the Diné (Navajo) people for centuries, Canyon de Chelly opens in a vast chasm amid the desert, its treacherous cliffs red rock ending hundreds of feet below in a stretch of cottonwood groves and flatter land, laced with a winding stream. In the mid-19th century, many Navajo lived in the canyon, cultivating crops and orchards until Kit Carson and the United States Army instituted a burnt earth policy against them in 1863. That winter, Carson rounded up thousands of Navajo families, many of them in this canyon where they had sought refuge, and marched them on the “Long Walk” over 400 snowy miles to a prison camp at Fort Sumner, where they were kept with little food or shelter for four years. Hundreds died of hunger or disease or were shot along the way. 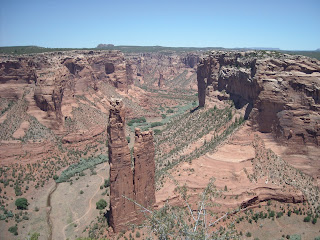 The Long Walk remains a vivid and painful memory for the Navajo to this day. However, with the 1868 treaty they were finally allowed to return back to their beloved land—unlike most other Native American tribes. While Canyon de Chelly has yet to return to its former bounty, about forty Navajo families currently live and work the land within the canyon. Only one hiking trail is open to visitors without an official Navajo guide, but that “White House” trail is well worth the climb down. At the bottom, you can see ruins in the canyon walls that pre-date the Navajo, and even glimpse, as we did, horses and a foal grazing beneath the cottonwood trees.

An hour or so south of Gallup, New Mexico, and quite near the Zuni Reservation lies the national park of El Morro. A striking rock formation rising from the desert, its shelter and natural waterhole marked a welcome and sometimes life-saving respite for people of various cultures trekking through the Southwest over hundreds of years.

Etched in the sandstone surface, you can find the names, drawings, and signatures of travelers ranging from Puebloan artwork to the elaborate scrawls of 17th century Spanish conquistadors to names of 19th century pioneers and cavalrymen. It’s quite an experience to stand there and see the names of real people reaching across the centuries.

Window Rock, Arizona, is the capital of the Navajo Nation, but it’s also a remarkable rock formation, a circular window to the sky that reaches heavenward above the Veterans Memorial. Flags of the armed forces flap in the desert wind overhead, and the bronze figure of the Navajo Code Talkers Memorial rises proudly to the side. A young Navajo Marine kneeling and speaking into his radio, the statue commemorates the over 400 Navajo Code Talkers who developed and used a code in their native language to help the Allies in World War II. Though little known and acknowledged even today, the Code Talkers turned the tide of the war in the Pacific, and their code was never broken by the Japanese. Below the statue spreads a pavement of bricks bearing the Code Talkers’ names. 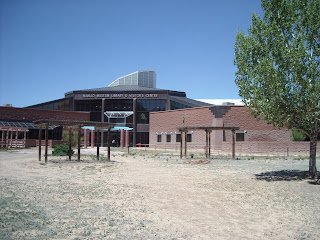 Nearby in the town of Window Rock, the Navajo Nation Museum rises in a glass-roofed modern interpretation of a hogan, the traditional Navajo home. Inside visitors can trace Diné history from early times, through the days of the Long Walk, into the present of a people who have suffered much, yet remain resilient, hopeful, and rich in history and culture. It’s a fitting place to either begin or end a trip to their land, often called the Dinétah.

So, how about you? Have you ever visited the Navajo Nation? If not, did any of these appeal to you to visit someday? Which ones and why? 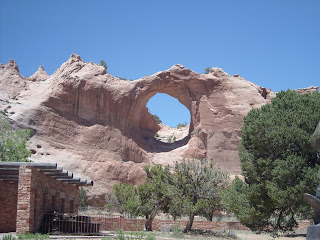