When I think of drudgery, the task that springs to mind is turning flax into linen. Ugh. That has to be the next worst thing to mud wrestling with a hog, though admittedly cleaner and somewhat less smelly. I’ve never done it, mind you, but just the description of what you have to go through to end up with a piece of linen fabric—which then still has to be laboriously hand cut and sewed into a garment—makes me tired. Let’s take a look at what was involved so we can dispel from our minds any romantic ideas about life in previous centuries. I gleaned the following information from Alice Morse Earle’s Home Life in Colonial Days, an invaluable resource for those of us who write about historical times.

The first step, naturally, was to plant a field of flax, which the farmer usually did in May by broadcasting the seed across the plowed ground. Children and young women got to weed the stuff once it was about 3 or 4 inches high, working barefoot and facing the wind so if they accidentally stepped on any of the plants, the wind would hopefully push them upright again. In June or July, when the flax was ripe, the men and boys pulled out the plants by the roots and laid them out to dry for a couple of days, turning them several times.

The next task was to “ripple” it in the field by rapidly drawing the stalks of flax through a coarse wooden or heavy iron wire comb with large teeth. This broke the seed boles off onto a sheet spread to catch them so the seed could be saved for the next crop or to sell. The stalks were tied at the seed end to form bundles called beats or bates, with the stalks spread to form a tent-shaped stack called a stook. Then the stooks were formed into squares called a steep-pool and piled into running water with each layer set at right angles to the one below. Boards and heavy stones were laid on top to keep the flax under water. This is called retting.

The bales were taken out after 4 or 5 days and the rotted leaves cleaned away. At this point the strong young men took over, breaking the flax on wooden flax brakes, which were about 5 feet long and constructed as you see in the illustration on the left. The flax was draped across the lower slats, and then the heavy top was dropped on it. If the brake’s top wasn’t heavy enough to do the job, it was hammered with a heavy wooden mallet. Flax was usually broken twice, the first time with an “open-tooth” brake, and then again with a “close” or “stait” brake. The next step was to scutch or swingle it with a swinging block and knife to remove small particles of bark that had survived the brake. A man could swingle 40 lbs. a day, but it was backbreaking work. 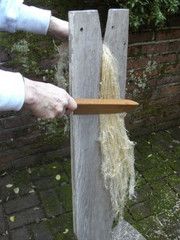 All of these steps had to be done in clear, sunny weather when the flax was dry as tinder. But the preparation still wasn’t done. Now the swingled flax was collected in bundles called strikes. These were swingled again, and the women spun and wove coarse fabric for bags from the refuse, called swingle-tree hurds. The cleaned strikes were sometimes beetled, that is, set into a wooden trough and pounded with a large pestle-shaped “beetle” until it was soft.

Now at last the flax was ready to be hackled or hetcheled. The fineness of the linen depended on how many hacklings the flax received, the fineness of the hackles (combs) used, and the skill of the hackler. The hackler dampened the flax and, holding the bunch at one end, drew it through the hackle teeth toward her. With one stroke the fibers had to be divided into fine filaments, the long threads laid in an untangled line, and the short fibers, or tow, separated and removed. The first hackle was called a ruffler, and the flax was then pulled through as many as 6 more hackles, each finer than the last. Finally the fibers were sorted by fineness, called spreading and drawing.

All of this was dusty, dirty work and had to be done during the dog days of summer at a time when air conditioning meant opening the windows and hoping for a breeze. The amount of good fiber left from the large amount of raw material you started with didn’t look like much, but a surprising quantity of linen thread could be made from it.

The fibers were now finally ready for the small spinning wheel. They were wrapped around the spindle and the spinner used the foot treadle to spin the fibers into a long, even thread. A small bone, wood, or earthenware cup or a gourd shell filled with water hung on the wheel so the spinner could moisten her fingers as she held the twisting flax while it wound onto the bobbins. When all of these were filled, the thread was wound off in knots and skeins on a reel. There were usually forty strands in a knot, and a clock reel counted the number of strands, clacking when it was full. Twenty knots made a skein or slipping. Two skeins of linen thread was a good day’s work, with a spinster being paid 8 cents a day and her keep.

Naturally, if you wanted fine linen the skeins had to be bleached to get them as white as possible. They were submerged in warm water for 4 days, with the water being frequently changed, then rinsed until the water ran clear. After that they had to be repeatedly “bucked” or bleached using ashes and hot water in a bucking tub; laid in clear water for a week; and subjected to a grand seething, rinsing, beating, washing, and drying. Buttermilk and slaked lime were also sometimes used for bleaching, and the woven fabric was also often placed outside on the grass in the sunshine for further whitening.

All this was just to get to the point where the thread could finally be woven into fabric on a loom. Whew! Hemp was also grown and processed in much the same way. Wool was not quite as labor intensive, but still needed a lot of processing. Obviously keeping one’s family clothed, sheets on the beds, and linens on the table was an ordeal, to say the least. Whenever you get a hankering for the good old days, keep this firmly in mind!

Earle quotes one of her sources, who wrote: “Few have ever seen a woman hatchel flax or card tow, or heard the buzzing of the foot-wheel, or seen bunches of flaxen yarn hanging in the kitchen, or linen cloth whitening on the grass. The flax-dresser with the shives, fibres, and dirt of flax covering his garments, and his face begrimed with flax-dirt has disappeared; the noise of his brake and swingling knife has ended, and the boys no longer make bonfires of his swingling tow. The sound of the spinning-wheel, the song of the spinster, and the snapping of the clock-reel all have ceased; the warping bars and quill wheel are gone, and the thwack of the loom is heard only in the factory. The spinning woman of King Lemuel cannot be found.”

All I have to say to that is praise God!!

I’ve watched spinsters and weavers at reenactments and marveled at their skill. Since we can just go to the store to clothe ourselves and our families, it can be enjoyable to try our hand at some of these crafts to get a feel for life in previous centuries. Have you ever done any spinning or used a loom, or are you an expert? Have you ever wanted to learn how to do these crafts or others from the “olden days”? Please leave a comment and share your experiences and thoughts with us! 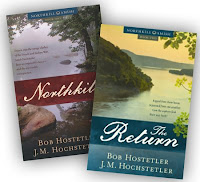 The daughter of Mennonite farmers, J. M. Hochstetler is an author, editor, publisher, and a lifelong student of history. Northkill, Book 1 of the Northkill Amish Series, won Foreword Magazine’s 2014 Indie Book of the Year Bronze Award for historical fiction. Book 2, The Return, released in April. Her American Patriot Series is the only comprehensive historical fiction series on the American Revolution. One Holy Night, a contemporary retelling of the Christmas story, was the Christian Small Publishers 2009 Book of the Year.