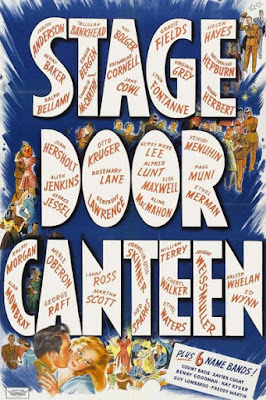 
In my next book, Shadow of the Curse, one of my characters plays in a band at The Stage Door Canteen. I thought you might like to know a little bit about the place ahead of time.

The first Stage Door Canteen opened on March 2, 1942, in the basement of the 44th Street Theatre in the heart of New York‘s theater district. Started and directed by the American Theatre Wing, War Service, Inc., the canteen offered servicemen entertainment, refreshments, and dancing. The canteen provided civilians in the entertainment industry with a way to “do their part” for the war effort and repay servicemen for the sacrifice they were making. 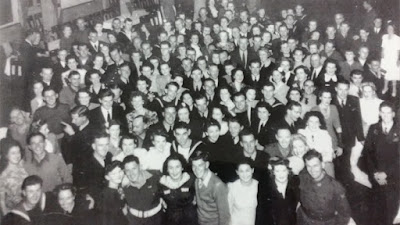 Capacity for the Canteen was 500, but tickets were issued to servicemen for one hour each, so in one night, as many as 2000 servicemen might pass through the doors. On opening night, entertainers included a comedian, ballet dancers and several popular actors of the era. The canteen was so popular, servicemen, many who had left home for the first time, stood in long lines outside the building waiting for their turn to enter.

The G.I.’s were allotted one sandwich, one dessert, and one drink (tea, coffee or milk). No alcoholic beverages were allowed. The main draw was the entertainment, not only on the stage, but the servers were often stars from the theatre or movies. Only at the Canteen could a serviceman see someone like Red Skelton, Marlene Dietrich or Bette Davis in person for free.

Another attraction of the canteen was the young hostesses. These young women were selected to socialize and dance with the servicemen. They were identified by the red, white and blue aprons worn over their sensible dresses. 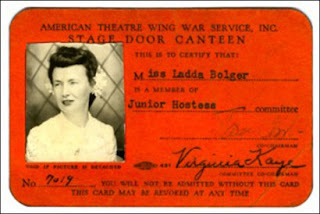 Hostesses were not allowed to date any of the servicemen and were supposed to ration their time with each, not spending too much time with one man. They were also expected to be friendly and dance with any serviceman who asked, regardless of age, rank, or race, showing equal treatment to all.

The Stage Door Canteen received favorable publicity in newspapers and magazines across the United States as the place where stars of stage and screen did their humble best to support servicemen.

The Canteen was also the subject of a popular radio variety show, and a successful musical film in 1943, “Stage Door Canteen.”

The Canteens closed at the end of war, but the National WWII Museum in New Orleans has revived their tradition with a replica Stage Door Canteen, with food and entertainment of the era.

Have you ever heard of the Stage Door Canteen? Did you have any relatives who either went to them or worked at them? I'd love to hear your story.

Marilyn Turk loves to study history, especially that of lighthouses and the coast of the United States. She is the author of Rebel Light, a Civil War love story set on the coast of Florida, The Gilded Curse, a historical suspense novel set on Jekyll Island, Georgia, in 1942, and Lighthouse Devotions - 52 Inspiring Lighthouse Stories, based on her popular lighthouse blog. (@ http://pathwayheart.com) Shadow of the Curse, the sequel to The Gilded Curse, will be published in 2018.
Posted by Marilyn Turk at 12:30 AM