The City of Dreaming Spires: History in Oxford, England 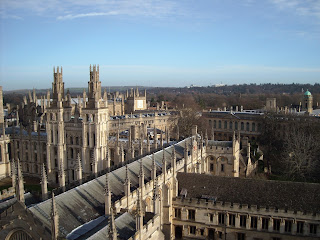 Last fall, my husband and I got to visit my sister in Oxford, England, during her study-abroad term there during her senior year of university. It all brought back many memories of my own semester studying in the “City of Dreaming Spires” during college, nearly ten years ago, and the incredibly rich history this centuries-old city of England holds. If you ever get the chance to visit, here are a few “sneak peeks” of the history you’ll find in this place considered to hold the top university in the world.

For us Americans, the sheer “oldness” of England can be astonishing. I enjoyed telling family and friends back home how I was studying at New College in Oxford…which was ”new” in 1379. It really is a different perspective; one lecturer I had the privilege of hearing informed us that there is “nothing new since 1500.” The 39 colleges scattered through the city that make up Oxford University were built at various times through the centuries, but many date back to the Middle Ages, as do several other buildings through the city. It’s quite an experience to walk down the street, past bicycles, post boxes (some dating to Queen Vicoria), and litter bins, and be able to run your hand along a medieval stone wall, thinking of all the people who have walked this same path over the ages. 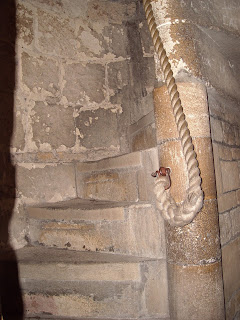 Highlights to see: The University Church of St. Mary the Virgin

The original university church, and still a functioning congregation today, this beautiful Gothic structure dates to the 1200s. If you can handle mounting numerous winding stone steps in a tight space while clinging to a rope, spend the few pounds to climb the church tower—the view from the spire up top is incomparable. And you may even find a nesting pigeon in a cranny on the way up.

Oxford was the site of some significant events in European church history, particularly during the Reformation. In the same University Church mentioned above, a large notch cut in one of the stone pillars supporting the church inside the sanctuary marks the platform where Thomas Cranmer stood and withdrew his former recantation of his Protestant beliefs. He, along with Hugh Latimer and Nicholas Ridley, were all burned at the stake in Oxford in the 1550s under Queen Mary. A cross still marks the spot on Broad Street near Balliol College.

Moving a bit later in church history, John and Charles Wesley both attended the University at Christ Church college, another of Oxford’s most famous colleges. John Wesley preached a number of times at the University Church, until his critiques of spiritual apathy made him no longer welcome. Smaller Methodist preaching houses and chapels soon sprang up to fill the gap.

Highlights to see: The University Church; the Martyrs Memorial; the cross in Broad Street

The Inklings and other Literary History

Oxford has nurtured many of England’s finest writers, including Oscar Wilde, Percy Bysshe Shelley, and Gerard Manley Hopkins.
Lewis Carroll’s famous Alice in Wonderland was inspired by stories he told to a friend’s daughter (named Alice) on rowboat trips up and down the river Thames (more a stream here than when it reaches London).

Most fascinating to many, Oxford is the cradle of the Inklings, the group of writers including J.R.R. Tolkien and C.S. Lewis that birthed such treasures as The Chronicles of Narnia and The Lord of the Rings. Lewis and Tolkien and their writing buddies met regularly at the local Oxford pub The Eagle and Child, where visitors can step right into the Rabbit Room where these beloved stories were critiqued, shaped, and discussed.

Not far away, in the Oxford suburb of Headington, privileged visitors can actually step into C.S. Lewis’s home, The Kilns. As it is still the home of visiting scholars, The Kilns can only be seen by special arrangement, but it’s a treat if you get the chance.

Pronounced “maudlin,” this is the college where C.S. Lewis taught and also boasts a deer park.

The Eagle and Child

Don’t miss a chance to dine at this cozy pub, built in 1650 and fondly known by the Inklings as “The Bird and Baby." You can find plenty of non-alcoholic options and hearty, affordable English food, not to mention relish the historic atmosphere and see if you can find a hobbit or a faun sprung from the pages of a beloved book.

There's still far more history to see in Oxford, but at least that gives you a peek! How about you? Have you ever visited this "City of Dreaming Spires," or heard much about it? If not, which of these places sounds most appealing to you? Are you an Inklings fan? Please comment and share!

Kiersti Giron holds a life-long passion for history and historical fiction. She loves to write stories that show the intersection of past and present, explore relationships that bridge cultural divides, and probe the healing Jesus can bring out of brokenness. Kiersti has been published in several magazines and won the 2013 ACFW Genesis Award - Historical for her manuscript Beneath a Turquoise Sky. A high school teacher and member of American Christian Fiction Writers, Kiersti loves learning and growing with other writers penning God's story into theirs, as well as blogging at www.kierstigiron.com. She lives in California with her wonderful husband, Anthony.