The Grand Canyon of Texas

Palo Duro Canyon is a well kept “secret” in Texas and is the second largest canyon in the country in the heart of the Texas Panhandle, second only to the Grand Canyon. Many people have never heard of the canyon, but it is a place of immense beauty and comes upon you so suddenly as you drive toward it that it literally takes your breath away. The first time we saw it was as a family in

1972, and I was completely and utterly amazed.

The canyon is believed to have been formed in the Pleistocene age at a Dog Town Fork tributary of the Red River.  People have inhabited the canyon for as long as 12,000 years. They hunted large herds of mammoths and giant bison within the canyon walls. Later tribes such as Apache, Comanche and Kiowa lived off the abundant resources in the canyon. They left behind rock art and bedrock where they found roots and beans to grind for food.

The name is said to come from the early Spanish Explorers, and the name is Spanish for hard wood referring to the mesquite and juniper trees there. 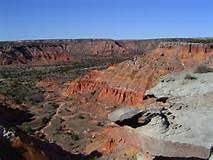 The formations found there were deposited or formed during the Permian and Triassic periods. The oldest is the Quartermaster Formation which comprised the red, lower slopes of the canyon. Next is the Tecovas Formation which is a multicolored Triassic unit of shale, siltstone, and sandstone that was deposited in varying oxidizing conditions giving them color. This formation also contains the remains of prehistoric amphibians and fish.

The third formation is the Trujillo and forms many of the canyon’s ledges. It is composed of coarse sandstone, but fossils are rarely found here. The fourth and last is the Ogallala Formation which was formed from late Miocene to early Pliocene ages. Fossils of saber-toothed cats, mastodons, horses, and long-necked camels may be found here.

A battle between the U.S. Army and the southern Plains Indians was fought there in a war in 1874. The war lasted about a year. The battle in the canyon was a decisive one for the army troops on September 28, 1874. The Indians were defeated, and with no horses or supplies, they had no choice but to return to the reservation. Soon after that, the reign of the Native Americans over this area of Texas ended.

The canyon was also the site of many of Charles Goodnight’s trail drives which I wrote about in July and August. One of the ranches of that era still operates today. The JA Ranch is owned by the descendants Goodnight’s partner, John Adair.

One of the Longhorn cattle driven on the trail. 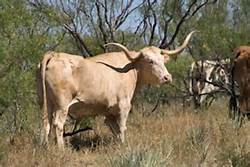 The land lay wild and open to all who wanted to try and eke out a living in the canyon until 1933 when the state bought the land from Fred S. Emory. Not long after that, the Civilian Conservation Corps workers arrived and spent five years creating a park.

The men built a winding trail road to the canyon floor and used it to hike in and out of the canyon until the park work was done. The CCC added a lodge which is now the visitor center as well as cabins on the rim and the canyon floor. Local stone and wood was used in the structures as well as decorative metal and
handcrafted furniture.

The park was opened even before completion in 1934. At 28,000 acres, it is the second largest state park in the state parks systems. Today it has more than 30 miles of hiking, biking and equestrian trails. Campsites have electricity and water or they may be primitive drive-up sites. Cabins also are rented on the canyon’s rim with four limited service cabins on the canyon floor.

One of the "cabins." 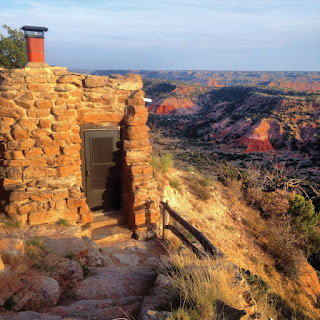 One of the most loved features is the musical TEXAS performed at the Pioneer Amphitheater in the park. The musical portrays the stories, the struggles, and the triumphs of early setters.

This is probably one of the most photographed areas besides Lighthouse Rock. (See in picture at top) It is the entrance to the park. 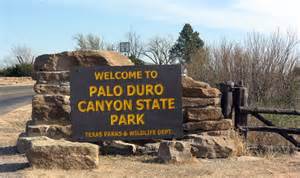 Find out more about the canyon here: https://tpwd.texas.gov/state-parks/palo-duro-canyon