I guess maybe I’m a bit strange, but I’ve always found reading about the practice of medicine interesting. Not interesting enough to want to pursue it as a career like my mother—formerly an RN—did. But all the way back to my middle and early high school years, I recall sitting down to read her nursing textbooks, the medical dictionary close at hand to look up all the big words I didn’t understand, just to find out how one would treat pneumonia or other illnesses. (Yes—I said I was strange!) Even today, I find tidbits of old medical practices from times gone by to be interesting. So I thought I’d share a few from the Civil War with you today.

Random Fact #1: Necessity was, in fact, the mother of invention!

Today, we take it for granted that we can drive to the nearest drug store and pick up over-the-counter pain medications for a headache, antibiotics for an infection, or pretty much any other supplies we might need. In the 1860s, many of our modern medical conveniences hadn’t yet been invented. And even for those that had been, wartime meant that supplies were often low, or they might take longer to reach their destination. In the case of the South, supply lines were blockaded, so southerners had to find ways to go around or slip through the blockades—or they did without. Or…there was another alternative. Learn to make the medicines themselves. Southerners created medical laboratories where experimentation with all sorts of indigenous plants, barks, leaves, and roots was done. Herbal remedies were nothing new, mind you—people had been using medicinal plants to treat ailments and injuries for centuries. But the Southerners didn’t only pick existing plants, dry them, grind them to powder, and put them in their tea. No, these inventive souls tried cross-pollinating various species. They employed grafting processes of yet others. And by the end of the war, they’d found ways to produce opium and other common medicines of the day without having to run the blockades to get them.


Random Fact #2: The most popular medicine of the war was… 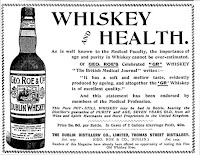 Alcohol. Medicinal whiskey and brandy were the most oft-dispensed medications between 1861 and 1865. In fact, because morphine and ether were so hard to come by, copious amounts of whiskey were often the only anesthetics available to wounded soldiers who had to undergo amputations. And depending on what illness you were being treated for, other (sometimes toxic) things were added to the beverage to cure what ailed you—anything from opium to cayenne pepper, to dried/powered plants, leaves, and roots to “fix you right up.”

Random Fact #3: The treatment could be worse than the illness.


All told, roughly 620,000 soldiers died in the Civil War. Of the dead, twice as many succumbed to illness and disease—dysentery, typhoid, and typhus being some of the most common—as did those who died from wounds received during battle. Of course, in those days and in wartime conditions, treatment was far from consistent. One doctor would treat a case of dysentery one way, the next doctor would treat it another. In one such case, a doctor in a Philadelphia hospital began to treat a man who’d suffered with diarrhea for three solid months. The treatment prescribed by this doctor included heavy doses of lead acetate, opium, sulfuric acid, belladonna, ipecac, and calomel, among other things. The poor fellow suffered three months with dysentery only to die two weeks into his “treatment!”

We take it for granted today that doctors, nurses, and other medical practitioners know to scrub thoroughly and don gloves, masks, and gowns before providing critical care in emergency situations. But doctors in Civil War field hospitals had no such understanding—and they made little effort to prepare their makeshift surgical areas before the next badly wounded soldier was carried in. At most, a bucket of water would be thrown over the operating table to clear off the previous patient’s blood. Medical instruments were not sterilized between surgeries. Instead, they were quickly rinsed and reused. Sponges, rags, and rinse water were not changed out for fresh ones between patients. Bacteria was rampant in such an environment, and the fact that the doctors likely didn’t, or rarely, washed their hands between surgeries only furthered the spread. The doctors in that day actually thought that the appearance of “laudable pus” in a wound or site of amputation was a sign of healing. I wonder how they explained the huge death tolls of their patients, despite the appearance of the healing pus?

Random Fact #5: The Rebel wounded healed faster than the Yanks?


There’s a story I’ve heard that military hospitals during the war sometimes treated—or at least housed—both Union and Confederate soldiers under the same roof. In one such tale, soldiers of both sides were sent to the Union infirmary at Chattanooga. During a particularly difficult time when traditional medicines were hard to come by, Union doctors treated the Federal soldiers’ wounds with chloroform, and the wounds were covered or packed with lint to keep maggots from them. The Rebel wounded were not afforded such “luxuries” in their care so, gross as it sounds, flies laid eggs in the wounds and maggots soon formed. To the great surprise of the doctors, the Union patients’ wounds grew infected and worsened while the Confederate patients’ wounds were clean and began to heal. What neither side’s doctors understood at that time was bacteria. These creepy maggots were helping rid the wounded men of bacteria so that healing could come. Despite seeing the proof of the medicinal benefits of maggots, the Union doctors continued to pack or cover the wounds with lint, which continued the process of the Rebel soldiers healing faster than their Yankee counterparts.

It’s Your Turn: Were you aware of any of these medical facts? Which ones were new to you?

What kind of woman would answer an advertisement and marry a stranger?

Escape into the history of the American West along with nine couples whose relationships begin with advertisements for mail-order brides. Placing their dreams for new beginnings in the hands of a stranger, will each bride be disappointed, or will some find true love?
Posted by Jennifer Uhlarik at 1:00 AM