According to Santa, one of the most popular items in recent years was the Apple iPad.  I couldn’t help but smile upon discovering that the most requested item in letters to Santa in the 1800s was—an apple.
The tradition of writing to Santa started in 1871 when Harper’s Weekly published a cartoon by Thomas Nast showing Santa sitting at his desk reading letters.
Fortunately, letters to Santa were often published in newspapers, giving us a look into the hearts of Victorian children and society as a whole.
The form of the letter hasn’t changed much through the years. Most letters include a testament to good behavior, although Santa might well shake his head today if he received the following:
Dear Santa, I’m 12 years old and have been good. Please bring me cigarettes.  Your friend, Paul.
Then as now, girls generally wrote longer letters than boys and tended to be more social, asking after Santa’s wife or reindeer.
The Sears Wish Book was mentioned in many letters:
Dear Santa, you can send me one of everything from the boys' section of the Sears catalogue. But nothing from the girls' section. - Kent
Many letters in the 1800s inquired as to Santa’s health. This puzzled me, until one letter writer cleared up the mystery.  It seems that parents unable to afford Christmas toys told their kiddies that Santa was sick and couldn’t come.
I was surprised by the number of girls asking for boy dolls.  I didn’t know they had boy dolls back then.  Since a popular way of celebrating Christmas was to shoot off fireworks, it wasn’t surprising to find a number of requests for roman candles and pop crackers—mostly from boys.  Trains, baby carriages and marbles were also popular items.
Some children depended on Santa for ideas, as this letter from Henry Ford’s son attests:
Dear Santa Claus:
I Havent Had Any Christmas Tree in 4 Years And I Have Broken My Trimmings And I Want A Pair of Roller Skates And A Book, I Cant Think Of Any Thing More. I Want You To Think O Something More. Good By. Edsel Ford
It was tempting at times to read between the lines:
Dear Santa, I had an accident happen to me not long ago.  Please bring a rifle.  Your friend Amos
Then there was this: 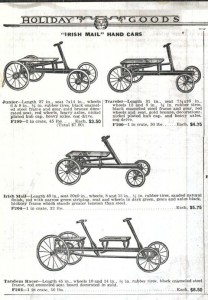 Dear Santa, I write these lines because my stomach is very empty and keeps flip-flopping; Please send a barrel of nuts, 14 pounds of candy, a small barrel of molasses and chewing gum.
Santa, it seemed, could do anything: One little girl asked for a cradle and washboard and a “sweetheart for my teacher, Miss Georgia.”
One thing that really stood out was the charitable nature of children.  Many letters contained pleas for poor children. In 1893, a little Texas boy named Louis St. Clair “bursted” his bank to send Santa twenty-five cents to give to the “poor little sick boy.”
Requests for teddy bears started popping up in the early 1900s, as did something called an Irish Mail.
Children didn’t always receive their heart’s desire, which probably explains the number of letters that ended like this: “And don’t try to fool me.”

Merry Christmas to All of You From All of Us!

It's Never Too Late For a Little Christmas Romance