A few years ago I wrote a book set in Bridal Veil, Oregon, titled Finding Love in Bridal Veil, a historical romance/mystery set in 1904. It's been optioned as a movie, and it will start filming in the spring for an international audience (7 countries have purchased rights). When it's finished, the producer will pitch it to the Hallmark Movies and Mysteries Channel. Praying that happens! I thought you might enjoy a few interesting details I learned about the town and area while researching for the book. 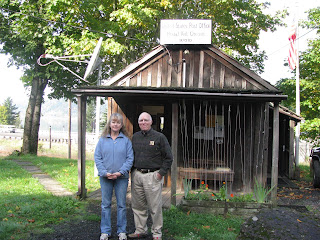 hardest? Bridal Veil doesn't exist anymore. The Forest Service tore down most of the remaining decrepit buildings over 25 years or so ago. The only thing remaining are a few homes, a community center (not historical) and a tiny post office that's the second smallest in the nation, but does a booming business for sending out mail. Brides from all over the nation send boxes of wedding invitations there to have them postmarked "Bridal Veil". Pretty cool, huh? 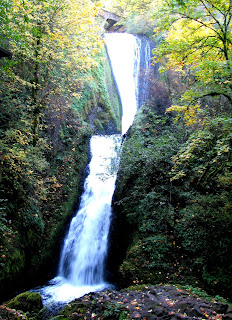 While researching, I met Tom Cowling, a wonderful man (see the pic above in front of the PO) who grew up in Bridal Veil and lived there for over 40 years. He wrote a book about the history of Bridal Veil called Stories of Bridal Veil as well as one about Palmer, Beneath the Ashes. He took me over the entire area, including a little used/hard to access road leading up to what used to be the town of Palmer, on the mountainside above Bridal Veil. Both towns were booming logging and sawmill towns. Palmer is where the logs came to and were sawed into large, square beams, then sent down the elaborate flume system to the lower mill in Bridal Veil, where they were sawed into lumber and shipped by paddle wheel boat at first, and eventually, by train.

There was a huge fire during the time period my book was set that wiped out Palmer, the little mill town on the mountain, and threatened Bridal Veil. Now, a little over 100 yrs later, that same general area was hit by a huge wildfire (caused by a teen boy who was shooting bottle rockets in the driest time of the summer, out on the hiking trails) that again threatened that area and wiped out thousands of acres of beautiful forest. The fire figures prominently in the later part of my book, but I never expected to come close to living it myself, many years later.

Another interesting fact is that my great-great grandfather and his new bride settled in Bridal Veil and logged with his team of horses for the saw mill. Later, he and his team were hired on to help clear the trees and stumps for the now-famous Old Columbia River Highway, a beautiful national treasure with amazing tunnels and gorgeous rock work, running parallel to and above the I-84 freeway. Here is one of the tunnels going through a rock cliff.

Amidst a backdrop of thievery and murder in historic Bridal Veil, Oregon, a 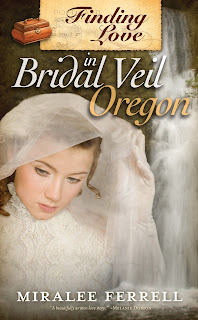 schoolteacher is torn between the memories of a distant love and the man who could be her future. Margaret Garvey had given her heart to Nathaniel, but he left town four years before. Now she’'s giving love another chance, but her decision to build a new life with Andrew is shaken when Nathaniel steams back into Bridal Veil on a riverboat to work at the nearby sawmill. When disaster strikes the town and threatens the welfare of its citizens, Margaret will be faced with the most important choice of her life.

Miralee Ferrell is an award-winning, best-selling author of 20 novels. Her newest book, Runaway romance, a contemporary romance set mostly in Kentucky, is available in print and ebook, and will air as a movie on UP TV on January 7th at 7 p.m. eastern. You can learn more about Miralee and her books at www.miraleeferrell.com
Posted by Miralee Ferrell at 1:00 AM