The First Christmas in North America

The wind howled through the cracks as snow blew in, chilling the group of French settlers huddled together in their primitive buildings. Winter had come early to the tiny island named L’Isle Sainte Croix by its discoverer Pierre Dugua, Sieur de Monts when he landed in June of 1604. Hoping to establish a French settlement in the new world, he and the king’s geographer, Samuel de Champlain, had outfitted two ships with provisions for the 77 men that traveled with them across the ocean. 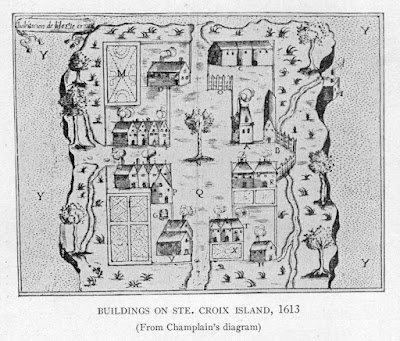 What they didn’t count on, however, was the poorly irrigated sandy soil on the island which didn’t sustain the crops they planted. As the water surrounding the island froze, the settlers were forced to live on melted snow water and salt meat. During the first year, 35 of the 79 French settlers died of scurvy.

Yet in even such dire conditions, the two Roman Catholic priests and the Protestant minister who accompanied the group conducted a Christmas service that year, committed to keep the French tradition. This Christmas service is believed to be the first Christmas celebrated on United States soil.

The surviving settlers later moved with Champlain to Nova Scotia, leaving the island deserted. In 1859, 250 years later, the first lighthouse was built on St. Croix Island, the mouth of the St. Croix River between the United States and Canada being an ideal place for a lighthouse. For a hundred years, American light keepers tended the light on the deserted island that belonged to Maine, the French settlement long since passed from existence.

Lighthouse keepers like Elson Small and his wife Connie served at the lighthouse and celebrated Christmas where the French had many years before. In December 1941, just after Pearl Harbor was attacked, the Smalls supervised the cutting down of an 18-foot tree which was used as the White House Christmas tree, commemorating the place of the nation's first Christmas.

In 1959, the light station was automated and the keepers were removed. Twenty years later fire destroyed the buildings.

The island is now deserted with little evidence of its former inhabitants.  The American light keepers returned to the American mainland, taking with them the traditions of Christmas which are still enjoyed today.

May you have a very merry and blessed Christmas!