After a break for a couple months, we are returning to our tour of the magnificent homes and estates that were built on the shores of Geneva Lake in southeastern Wisconsin during the late eighteenth century forward. 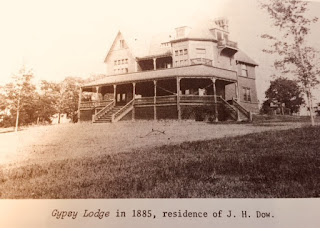 We left off with Swinghurst on the lake’s south shore, and we are now starting to round a slight turn where we come upon Gypsy Lodge. The Lodge has an interesting past, starting out as a lovely lakeshore home, which later became a lodge and restaurant, and that is basically how it stayed until …. Well, I’m getting ahead of myself.

Back in 1884, about twelve years after the first estates started appearing on the lakeshore after the Great Chicago Fire, J. Hall Dow, president of Union Brass Manufacturing in Chicago, purchased the eight-acre property from J.S. Rumsey, who owned several parcels of lakeshore land. Dow built a large rambling home he named Gypsy Lodge. Four short years later, he suddenly died, and Mrs. Dow spent the following summer in the east with relatives, never to return to the house. J.M.W. Jones then purchased the home for his family. He owned a stationer company, which carried his name. The company property had been completely destroyed in the Chicago fire of 1871, but Mr. Jones wasted no time getting the company back up and running.

The property’s greatest feature is the commanding view. To the east, one can look into the village of Lake Geneva, while to the west one can see almost as far as the hamlet of Fontana at the lake's west end. 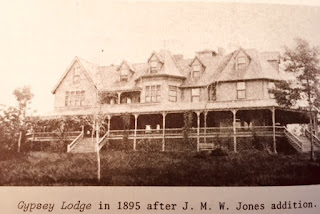 To accommodate the family, Jones built an addition that doubled the size of the structure, followed later by another smaller one. The result was eight bedrooms, a large porte chochere (covered driveway to allow passengers to enter and exist vehicles at the main entrance), and many fireplaces.

After Mr. Jones passed away in 1912, his son and two daughters took over the home, and they renamed it Sunnycroft. The only other change made at that time was the addition of electricity.

In later years after several changes in ownership, the property was renamed Sunnycroft Lodge and became a restaurant and guesthouse. That has been the property’s function ever since.

In the forties, the large plot of land was subdivided and the lodge’s name became The Shore Club. The large front porch overlooking the lake was enclosed and remodeled into a large restaurant dining room. Over the years, The Shore Club enjoyed a wonderful reputation of good food with a wonderful view of the lake to enjoy at the same time. Growing up, I remember going to many a “special dinner’ there and was very disappointed with the facility closed and the building was torn down after new owners found there were far too many costly repairs to be made to bring it up to code. 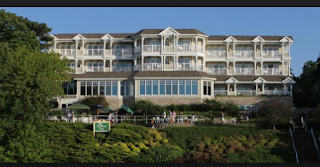 But, like beauty rising from ashes, a new beautiful building known as the Geneva Inn was built where one can still enjoy good food with an amazing view. The inn is now known as a boutique hotel that has received rave reviews.

To see more pictures of how  The Geneva Inn looks now and to read a more detailed history of the property you can go to:  https://genevainn.com/

I wonder what the property’s previous owners of what was called Gypsy Lodge would think if they came back to see what now sits on their land. I think they would find a lot unrecognizable except for one thing. The view is just as commanding as ever.

Photos of the original building and the one with the addition: Lake Geneva, Newport of the West; Ann Wolfmeyer and Betsy Burns Gage; 1976 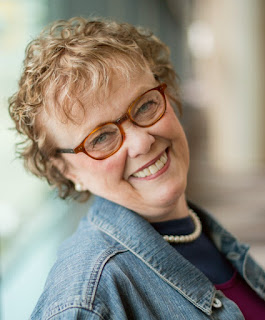 Pamela S. Meyers lives in northern Illinois with her two rescue cats. She’s always loved to write when, as an eight-year-old she received her first diary and began jotting down each day’s events. Her novels include Thyme for Love and Surprised by Love in Lake Geneva, Wisconsin (a reissue of Love Finds You in Lake Geneva), and Second Chance Love. Her novella, If These Walls Could Talk, appears in Coming Home: A Tiny House Collection. Her novel, Safe Refuge, which is set in Lake Geneva soon after the Great Chicago Fire, releases March 2018. When she isn’t at her laptop writing her latest novel, she can often be found volunteering at her church or nosing around her native Wisconsin for new story ideas.

A historical romance set in 1933 in the author's hometown. Meg Alden wants a job in a man's world, but she's falling for the guy who scooped up her one opportunity to move up. Available at Amazon in print and Kindle.