Where the immigrants landed

Before I began research on my immigrant novella, Journey to Freedom, I had no idea about the lengthy history of Ellis Island and the Statue of Liberty. While researching the statue, I came across data about the island and wondered how many others know the actual story without learning about it during research. That’s when I decided to follow up my Statue of Liberty piece with the story behind Ellis Island.

Back in the days before we became a nation, the west shore of the upper bay of New York consisted mainly of tidal flats and oyster banks on which the Lenape Indians relied for their major source of food. Several of the islands remained above water at high tide and became known in later years as Liberty Island, Black Tom Island, and Ellis Island. They were named the Oyster Islands by early settlers of the first European colony in the region.

Through the course of years, the railroad eventually killed off the oyster beds, engulfed one island and changed the shoreline of others. One of the islands left became known as Gibbit Island and is where some pirates were hung from one of the islands trees.

Around the time of the American Revolution, it was acquired by one Samuel Ellis and in 1785, he tried to sell the island without much success. In 1794, the state of New York leased the island and began to shore it and fortify in 1795 because too many English warships were able to come into the harbor during the war. No pictures of these early islands could be found.

It was ceded to the United States in 1808. The War Department then established a fourteen gun battery, a mortar battery, magazine and barracks. 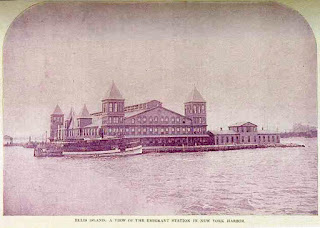 From 1808 until 1814 it was a federal arsenal and was named Fort Gibson after Colonel James Gibson who was killed during the 1812 war. It remained a military post for almost 80 years before the government turned it into a federal immigration station. A wooden building was built to process the immigrants in 1892, but in 1897 that building burned. Many records were then lost. A new brick and stone building was then erected and is still there today.

Approximately one million immigrants per year arrived in America between 1905 and 1914. Officials interviewed around 5,000 immigrants per day. In 1907, 1,004,756 immigrants were processed through immigration services on the island.  About 30 to 40% of Americans today can trace their ancestry to immigrants arriving on the island.

In this picture they are crossing over the bridge with all their belongings. 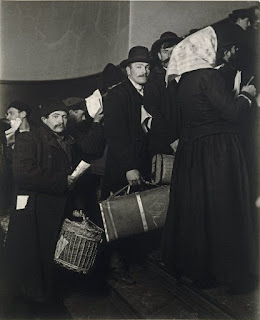 If they were in good health and their papers were in order, immigrants spent anywhere from two to five hours in interviews and health inspections before being allowed in. Officials asked twenty-nine questions including name, occupation, and how much money they carried.

Those with visible health problems were rejected and either sent back 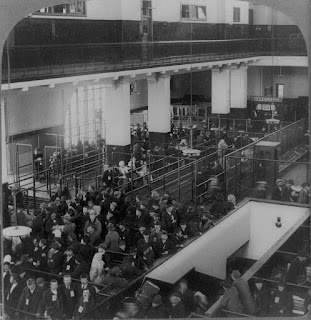 to their home country or held in the hospital facilities on the island. Some of those men and women, perhaps as many as 3,000, died on the island. About 2% were rejected for other reasons such as poverty, criminal background, or insanity. The island became known as “The Island of Tears” because of the rejections. The Kissing Post stands outside the Registry Room. So called because it’s the spot where relatives and friends greeted the new arrivals with hugs and kisses. 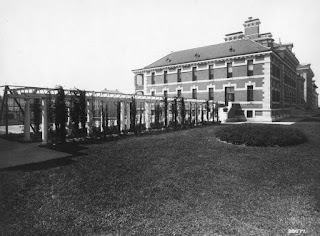 The hospital erected on the island to take care of those who were sick. 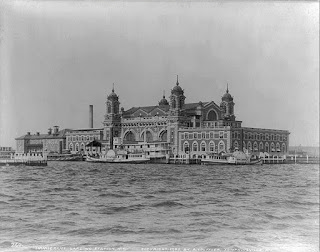 With the passing of the Immigrant Quota Act of 1921, the number of immigrants allowed to stay declined. After 1924, Ellis Island became a detention center and deportation processing station. During WW11, it was used to hold Axis nationals detained as possible spies. During that time, it also processed returning sick or injured soldiers. After the war, immigration once again rose.

In 1965, President Lyndon Johnson declared the island to be a part of the Statue of Liberty National Monument. The public had access to the island on a limited basis from 1976 until 1984 when it underwent a major restoration. The project was completed in 1990 and the museum opened.

Today, the Main Building is home of the Ellis Island National Museum of 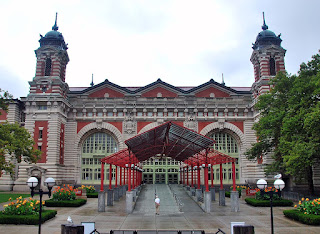 
I’m giving away a Kindle copy of a new collection in which my novella, Freedom’s Journey appears. Four romances of immigrant women finding love in America. 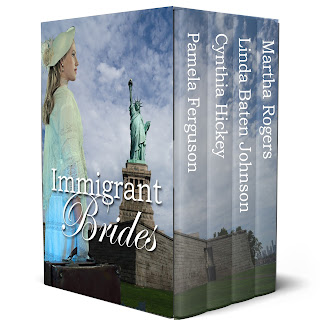 Leave a comment and your email address and answer the questions:
1. When did your ancestors come to America.
2. Did they come through Ellis Island?
3. From what country did they come?

Here is the blurb from my story,  FREEDOM'S JOURNEY: 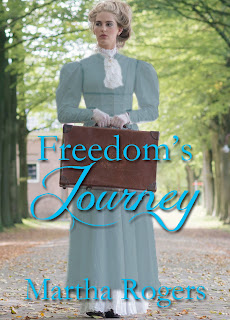 After her grandmother’s death in England, Rosemary Beckett is left with only a house and no means of support. An old friend of her deceased father offers her a position in America as governess to his grandchildren. He pays her passage, and Rosemary embarks on the journey. When they enter the New York Harbor, she meets a charming young man who catches her interest, but because he’s a first class passenger, she flees and leaves the ship without revealing her identity. Alexander Cartwright is fascinated by the young woman he met, but with no idea who she is, he only dreams of finding her again. When he discovers she’s the new governess to his brother’s children, he believes it’s God’s answer to his prayers and seeks to know her better. Rosemary locks her heart and determines not to be influenced by the handsome Alex. He determines to break the lock and set her heart free, but will he succeed? 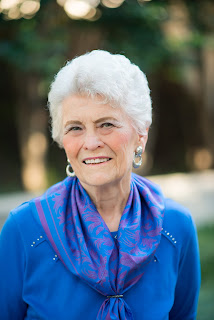 Find Martha at: www.marthawrogers.com
Posted by Martha W. Rogers at 1:30 AM